About Tempest Find Out More
TOP ARTICLES
1
Philly, these are your 25 nominees for the 2022 Technical.ly Awards
2
How I Got Here: Pittsburgh engineer Molly Urbina finds art, and community, in STEM
3
How I Got Here: These 9 tech and startup pros share how they began their career paths 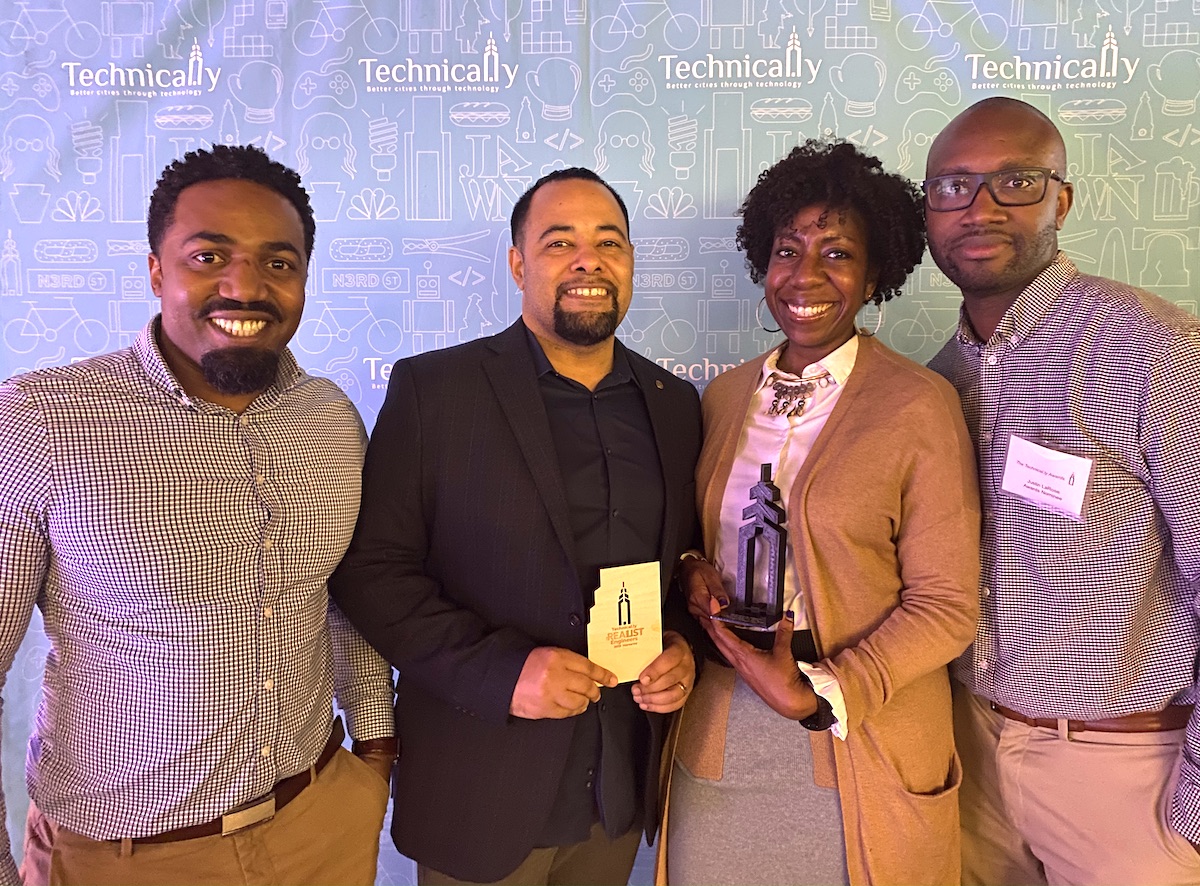 Members of Comcast's BENgineers at the 2019 Technical.ly Awards.

While attending a Black Employee Network (BEN) event at Comcast in 2017, software engineering manager Mumin Ransom realized that spending time surrounded by employees of a similar background was valuable — but that he could do more in supporting other Black technologists, specifically.

“I’m a firm believer that talent is equally distributed; opportunity is not,” he said. “We often say, the vision of the BENgineers was to give a voice for the underrepresented.”

And so, with former Comcast colleague Justin LaRose, Ransom cofounded BENgineers, an employee resource group (ERG) for Black technologists at Comcast. Black engineers are underrepresented among technologists overall, and LaRose shared Ransom’s vision for creating a community to focus on Black technologists, while offering them resources like public speaking training and an active Slack group.

The two used a Comcast Lab Week — which are held happen three times a year and allow employees to focus on projects like enhancing products or learning new skills — in 2017 to create the group that would later become BENgineers. Today, BENgineers has more than 200 members after starting out with just seven.

Employee resource groups are becoming a key indicator of diversity at firms: One 2017 study showed that 66 websites of Fortune 100 firms recognized their companies ERGs. They serve purposes ranging from increasing camaraderie among minority employees to creating a base from which employee concerns can be shared with organizational leadership to improving retention.

Those in management roles should do what they can to foster ERGs, say some local technologists who lead such groups at their orgs.

Ransom has found that collaborating with his employer allowed his organization to maximize its potential. An example of BENgineers’ success was the BENgineers Conference, a February 2020 event that brought 150 Black technologists together to discuss their work. Ransom and BENgineers leadership also want to make sure that Black women are receiving as much support in tech as Black men.

“We recognize that we could easily fall into the same issues of an exclusive group,” he said. “Our leadership is eight members and we want to make sure we have four women. One of the things I learned is that Black women only make up 3% of technologists overall. Knowing that we don’t have the optimal space, we wanted to sure we’re building everyone up.” Ashley Turner is the founder of women in tech resource group Philly Tech Sistas, and as an academic technologist at Swarthmore College, she has helped organize the Women of Color at Swarthmore ERG to support women of color in the college’s community.

After Swarthmore put out a survey to gauge how the campus community felt about assorted cultural topics, leadership saw the need to facilitate more ways for staff and faculty to communicate and connect with one or another. The school’s Office of Equal Opportunity and Engagement collaborated with its Office of Diversity, Inclusion & Community Development to launch a pilot program for ERGs.

"You have to empower these employee resource groups with some sort of influence."

Turner attended an event about an ERG for women of color and reached out to join its leadership team. Upon joining, she immediately started working on its charter and finding ways to center women of color at Swarthmore through visibility and advocacy.

Professional development is a key part of the group’s activity. The Women of Color ERG have hosted events where the college’s human resources officers gave advice on career development and the campus photographer provided members with free headshots.

Turner and her colleagues also found that when many women move to Swarthmore for work, they know little to nothing about resources outside of work. To help them get more familiar, the Women of Color ERG created a guidebook with information on resources like women-of-color-friendly doctors, hairstylists and popular restaurants. The Women of Color at Swarthmore ERG held even more significance when the pandemic forced students to learn virtually and staff and faculty to work from home in March. Turner found that most of its members had shifted to remote work and the ERG allowed them to continue building their relationships — even if they couldn’t meet in person.

“It’s important for us to continue to build our relationships because we’re remote during this time,” she said. “Especially because so many people are going through things with childcare, eldercare and having to work from home. People not only have K-12 students but other people to support.”

"We had a safe space to say how we felt about the situation and it was really helpful for everyone to release their thoughts and feelings."

In the spring, the Women of Color ERG had a virtual crafting event where people could enjoy drinks of their choice while working on crafts at home and connecting. For some members of the organization, it was the first time in three to four months that they had communicated with their peers.

George Floyd’s killing by police in May and the social unrest that followed would place even more of a mental burden on Turner and members of the Women of Color ERG. To help each other deal with the emotional trauma of the moment, Turner and her colleagues organized a “sister circle” event as a safe space for women to share their feelings.

“When the George Floyd incident happened, it was especially heartbreaking and a whole host of emotions happened amongst women and people of color in general,” she said. “It was important to come together as a group and hear each other. … We had a safe space to say how we felt about the situation and it was really helpful for everyone to release their thoughts and feelings about it and just be with a group of women sharing that same experience.”

When Benjamin Deane started his job as an Agile practitioner at The Philadelphia Inquirer in August 2019, he found that there were not any ERGs for LGBTQ people in his new workplace. An out gay man, he communicated with human resources and learned that there had been interest in starting one, but no results yet.

This was the impetus of the Prism LGBTQ+ ERG, which he created with a fellow coworker who started work at the Inquirer the same day he did. Deane found that having company leadership involved in the process could help his ERG have measurable results and gain a sense of empowerment when it comes to shaping company policies and practices.

“Whether that’s a manager or someone that’s a part of executive leadership, it’s important to have someone who has influence to make changes throughout the company or organization,” he said.

Deane said Prism’s work has largely provided a sense of community for LGBTQ+ people and it started by creating space for people to safely discuss the issues they have at work. Like the Women of Color at Swarthmore, using virtual events like Zoom lunches has helped Prism members stay connected during the pandemic.

Setting measurable goals has helped Deane and his colleagues develop Prism and he believes it’s a goal that anyone hoping to start an ERG should have. By communicating ways in which Prism could support higher readership for the Inquirer, Deane found that the company was more willing to support it.

“If we can provide better news to LGBTQ+ people in Philly, that is great,” he said. “It helps the business.”

With the Women of Color at Swarthmore’s success, Turner is clear on an ERG being one part of a bigger effort to enact change in the workplace and is a beginning rather than an end to the process.

“It is not the only answer to fix some of the disparities that have been brought to light of late,” she said. “I can foresee more ERGs coming on board at companies and I would like to caution that is not the only fix. It has to be included in a holistic program or initiative to really be impactful. The important piece is to have leadership be a part of the coordination team. You have to empower these employee resource groups with some sort of influence. I can’t stress enough that they are not just social networks.”