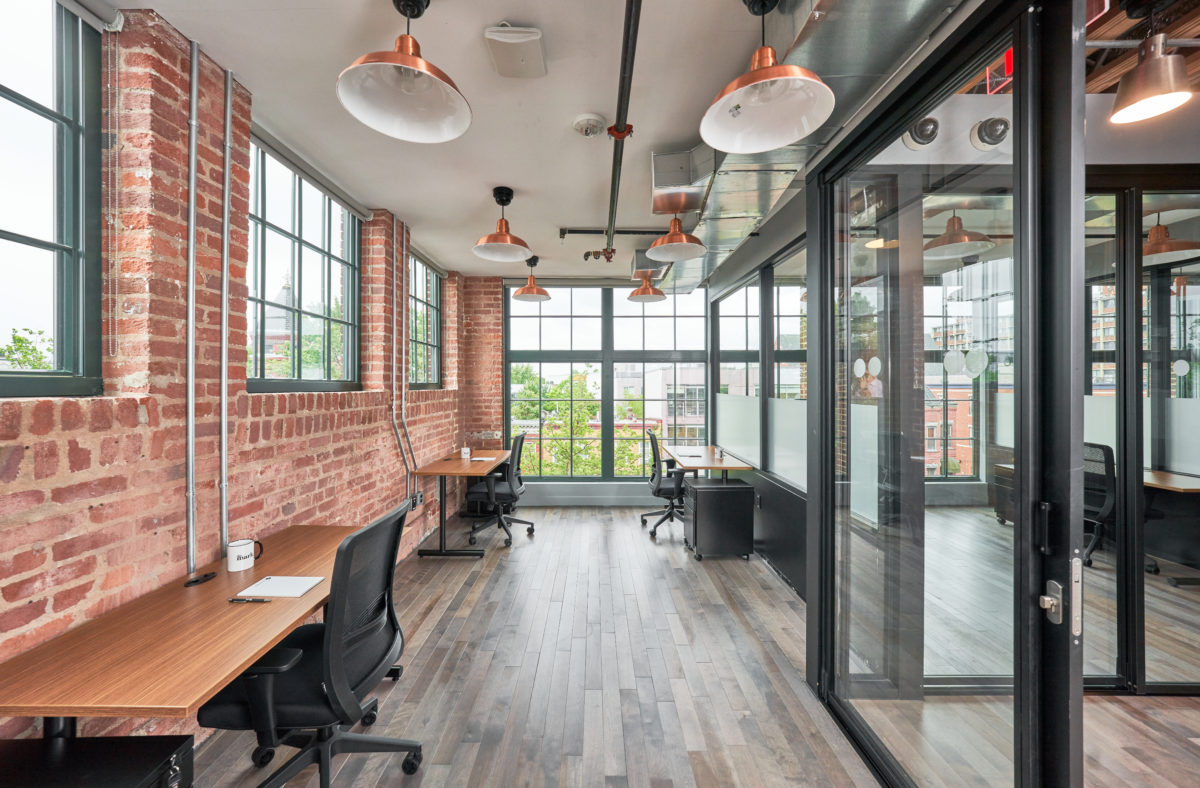 Flex workpace at The Mark, located in Shaw.

In the great remote versus in-person versus hybrid debate, coworking is an oft-mentioned contender for cities across the US, and DC is no exception.

That idea is not lost on flex working company The Mark, which is currently taking on the task of revamping former WeWork locations to bring three new coworking spaces to Northwest DC. Its inaugural location, in the old Wonder Bread factory in Shaw, opened in July with 130 offices and about 500 desk spaces. Two additional locations, in Chinatown and Manhattan Laundry near U Street, are expected to open mid-September.

The Mark Director of Development Artur Samofalov said the spaces will feature flexible options like short-term leases, or the option to trade off with another company a few days a week. Despite return-to-work delays, Samofalov said that he’s already seen interest in the spaces from people looking to return to the office once the school year starts. Coworking in particular, he said, is appealing due to its inherent flexibility. “A lot of people talk about this hybrid model and this and that, but coworking or flex office space was already created for that,” Samofalov told Technical.ly. “It’s up to the company to decide, how do you want that to play into work?”

The 32,000-square-foot Wonder Bread factory space, opening during the brand’s 100th anniversary, includes typical coworking amenities like La Colombe on tap, plus two outdoor spaces for events (or those that like to work in the sunshine). Samofalov said the company worked to keep the building’s factory-style feel, as well, as a nod to its roots. It also includes touches like hand sanitizer on the tables from local distilleries and artwork from a nearby gallery. Samofalov said that the space is at 10% capacity, with prices starting at $350 monthly.

“There’s a lot of history in this building. You can see it, feel it when you walk inside; you see the old brick, you see the façade, you kind of feel that,” Samofalov said. “So we tried to keep it the same throughout the spaces in the building, and keep in a lot of its industrial-looking feel.” The indoor/outdoor office and event space at The Mark. (Courtesy photo)

Samofalov, a coworking development pro with previous roles at MIXER and Carr Workplaces, believes coworking won’t be hurt by the new remote-first world many are embracing following lockdown orders. In fact, he thinks it fits perfectly into the flexibility many are looking for, with short-term and part-time options that can adapt as mandates and vaccination needs change. He even anticipates larger corporations embracing flex working space, opting for a model of having a few representatives in each city instead of many employees at a few branches nationwide.

So far, he said The Mark has mostly signed year-long leases, and no one has taken them up on the ability to timeshare space a few days a week and swap out with another company. But with some employees set on not returning to the office while others are in desperate need of a space away from home, he thinks coworking will only become more appealing as companies make return to work plans.

“For coworking spaces, it’s always been different,” Samofalov said. “We can sign a month, two, three. It’s up to you how you want to do it, and I feel like it’s great and a lot of businesses will be coming back and the community will grow, because they now realize, okay, that’s what flexibility is.”