Technical.ly's RealLIST Startups 2022 in DC is underwritten by Morgan Lewis. The list was independently reported and not reviewed by Morgan Lewis before publication.

Update: A previous version of this article noted that Meaningful Gigs focuses on developers and designers from the global Black African diaspora. Instead, it focuses on professionals in those disciplines from the continent of Africa, regardless of race or ethnicity. (4/21/22, 11:31 a.m.)

It’s a time for newness, folks.

We’re almost one month into the new year, a time when we figure our resolutions are going to stick, get back to the groove of the daily grind and dream of the warmer days to come with spring. And with the end of January comes one more tradition on the Technical.ly circuit: We’re back with our sixth annual RealLIST Startups series.

In case you’re new here yourself, know that these roundups name the top 20 startups that we think will be making noise this year, from potential funding moves to growing the team and launching new and innovative products. We curate this list from our own past coverage, a few select nominations, local accelerator cohorts and events, social media, and the myriad of other ways y’all come up on our radar (yes, we are watching you, even if you don’t know it yet).

Last year, we pretty much nailed it with our RealLIST Startups honorees, even in a changing marketplace from the effects of ‘rona. We hit the quantum trend nail on the head, naming Quantum Xchange as #4, ahead of the highly anticipated IPO from Maryland’s IonQ. Sorcero, our #5, went on to raise a $10 million Series A in September, added a partnership with MEDiSTRAVA and launched an Intelligence Literature Monitoring platform. And we may never have been more right when we named Class Technologies as our #1, seeing as it went on to raise $160 million, eyeing unicorn status at an $804 million valuation.

To make it on our list, companies had to have the following criteria: 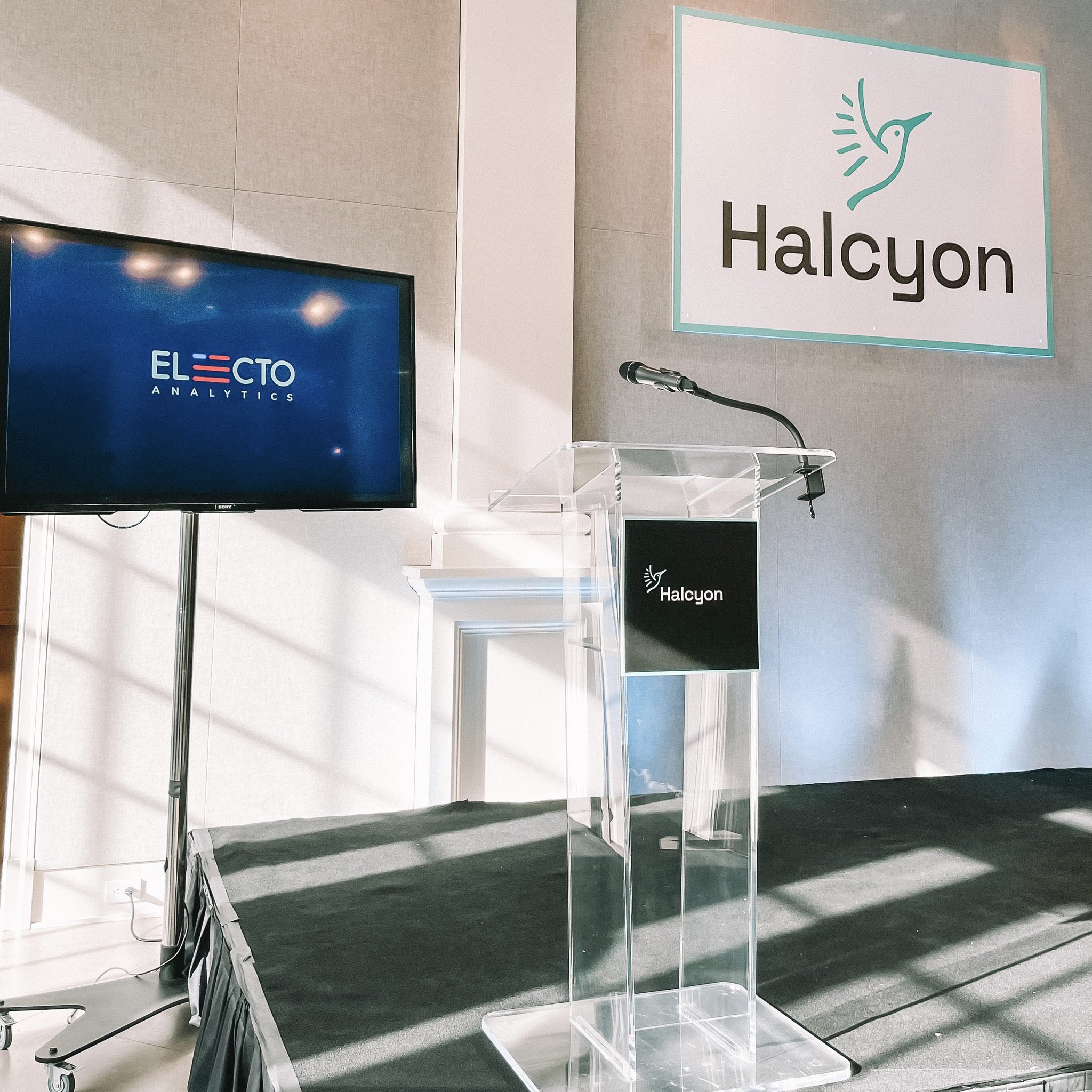 Electo Analytics is a 2021 Halcyon fellow. (Photo via @electoanalytics on Twitter)

A 2021 Halcyon fellow, DC-based Electo is a public affairs software company that developed a collaborative workspace for policy teams. Cofounders Naeim Khanjani and Soraya Bagheri were also DC Startup Week winners in the growth-stage category. Khanjani was also named on the Forbes Next 1000 for promising entrepreneurs in 2021. Dr. Lily Talakoub is the founder of Derm to Door. (Courtesy photo)

Founded by dermatologist Lily Talakoub, McLean, Virginia-based Derm to Door is an AI-based app that virtually diagnoses skin issues with what it says is 98% accuracy, while allowing for appointment scheduling. Though it’s currently bootstrapped, the startup plans to add telehealth services early this year and is in the midst of a seed funding round to accelerate growth. The company declined to say how much it’s raising, but in April 2021, Talakoub told Technical.ly she’d be looking for $10 million. The DC-based company, which was founded in 2019, is a startup connecting local companies to product designers and developers based in Africa. It recently launched Meaningful U, a data-science and machine-learning-based software that hosts learning modules and job-training assistance for the designers in MG’s repertoire. With 2,000 design partners already in its network, the company is on its way to achieving its mission of 100,000 new jobs for African designers by 2028. Allison Cavasino and Natalie Poston (left) are the founders of JoyLet. (Photo via @DCstartupweek on Twitter)

The baby gear rental startup was founded by two Georgetown University MBA students who met in 2019. In the few years they’ve been around, founders Allison Cavasino and Natalie Poston have managed to nab $12,000 in non-dilutive funding as the grand prize winner of the Georgetown Entrepreneurship Challenge and an additional $30,000 from the Georgetown Bark Tank pitch competition. This fall, JoyLet was also the winner of the DC Startup Week pitch competition for early-stage startups. Georgetown-based Adrian Abrams and Kamar Mack launched their no-code software company in 2019, allowing founders to build applications without hiring a developer. The startup is one of two DC companies to land a spot in the inaugural Future Collective Fellowship Program, nabbing $24,000 in funding (plus accolades) from Fiverr, 1863 Ventures and maestra. After quietly shuttering TwentyTables last year, founder Alex Cohen moved on to a new project following a low-key stint as a Reddit moderator. Urvin Finance is a social platform for retail investment and education, with the help of its flagship product: The Terminal. It only launched in the summer of 2021, but the company has already raised $900,000 via a Wefunder campaign. In 2022, the company has plans to ramp up its launch and move into the beta stage; Cohen and his crew have kept a timeline and what this might look like pretty under wraps, but they say it’s going to be big. Aneta Ed is a Maryland-based edtech company. (Photo via AnetaWayfinder on Twitter)

Founded in 2020 by Afua Branoah Banful, also known as BB, Aneta Ed helps students safely navigate through teacher and parent-approved websites and education resources. The company officially launched last January, raising $280,000 in a friends and family round later in the year, but it has big plans for DC’s booming edtech market in the new year. In 2022, it plans to build an “Anetapack” marketplace that will let teachers sell and share their educational content and resources to parents, with the help of a $1 million raise it has planned for Q2.

“It is just a waste that right now parents and teachers who are seeking digital enrichments on a topic can’t reuse the expertise of others,” Banful told Technical.ly. “In the same way that Spotify playlist curators pull together great music, Anetapack curators will do the same for engaging digital journeys and educational content that parents and teachers can apply easily to kids’ profiles.” Founded by Angela Ferrante, an entrepreneur-in-residence at NYSERDA and founding CMO of Sparkfund, Laudable is a B2B marketing platform to help companies find and engage customers through video reviews and testimonials. In 2021, the DC-based startup joined Y Combinator, added a CTO and raised $2.95 million in seed funding, leaving plenty of room to grow in 2022. Built on the backbone of open-source data, SaaS startup hotglue was created by University of Maryland students Hassan Syyid and David Molot (who have since dropped out to take on the project full-time). The company, which created software to connect developers to business applications, raised $1.5 million in 2021 and landed a slot in the Y Combinator Summer 21 accelerator cohort, with a reported 50% month-over-month growth as of the fall. It’s also partnered up with open source projects Meltano and Cumul.io. The ecommerce company uses AWS and Ruby on Rails-based web integration software to allow fashion brands to host peer-to-peer reselling on their websites. The Arlington, Virginia startup has got plenty of momentum to bring into 2022: Last year, it raised $3.25 million and landed partnership deals with Steve Madden and Dolce Vita, as well as UK-based Beyond Retro. It’s backed by Gradient Ventures and Revolution’s Rise of the Rest as it heads into the new booming resale market this year, which is expected to reach $77 billion in the next five years, according to Forbes.

Honorable mentions (in no particular order)