Full disclosure: Balance Theory's recent raise was partially funded by TEDCO, a Technical.ly Ecosystem Builder client. That relationship is unrelated to this report.
Greg Baker isn’t worried about what the looming recession might mean for him or his latest company.

“It’s a hard time for big companies that have grown really fast and focused solely on growth, and you’re seeing a bit of that correction,” he recently told Technical.ly. “But I also, in the same breath, think it’s a great time to start a company.”

That logic seems to be working for Balance Theory, the Columbia, Maryland-HQed cybersecurity startup he co-launched back in March and leads as CEO. This week, the company announced that it raised $3 million in what he described as “seed funding” that was led by fellow Howard County denizen DataTribe — an investment separate from the cyber- and data science-focused firm’s naming Balance Theory the winner of the fifth annual DataTribe Challenge last month.

“In the traditional sense of the word, this would be really considered ‘pre-seed, seed-based funding,'” Baker explained about the latest raise, in which TEDCO also participated. “But in the world of the last five years, where seed rounds were kind of treated like Series As and others that might be considered premature of how people previously thought of seed, we’re definitely thinking of it as our ‘seed funding’ — funding that will be required to take us into growing our product message.”

That message revolves around Balance Theory’s core platform, which Baker said is designed to help cybersecurity teams that may otherwise be buried under several threats, siloed in their work and unable to fill their corner of a nationwide cybersecurity talent gap. It includes components that facilitate easier live collaboration and incident reporting among teammates, as well as store and integrate information in a way that can be reused if similar incidents arise.

Baker said that he and his colleagues at the eight-person company saw an opportunity to bring the kind of cooperation-focused outlook that flourished during the COVID-19 pandemic, which filled a need while people across industries couldn’t work together in person, into the cybersecurity industry. They additionally saw a chance to “democratize” the cyber-collaboration process beyond the “expensive” and “bespoke” solutions that already existed in his field. 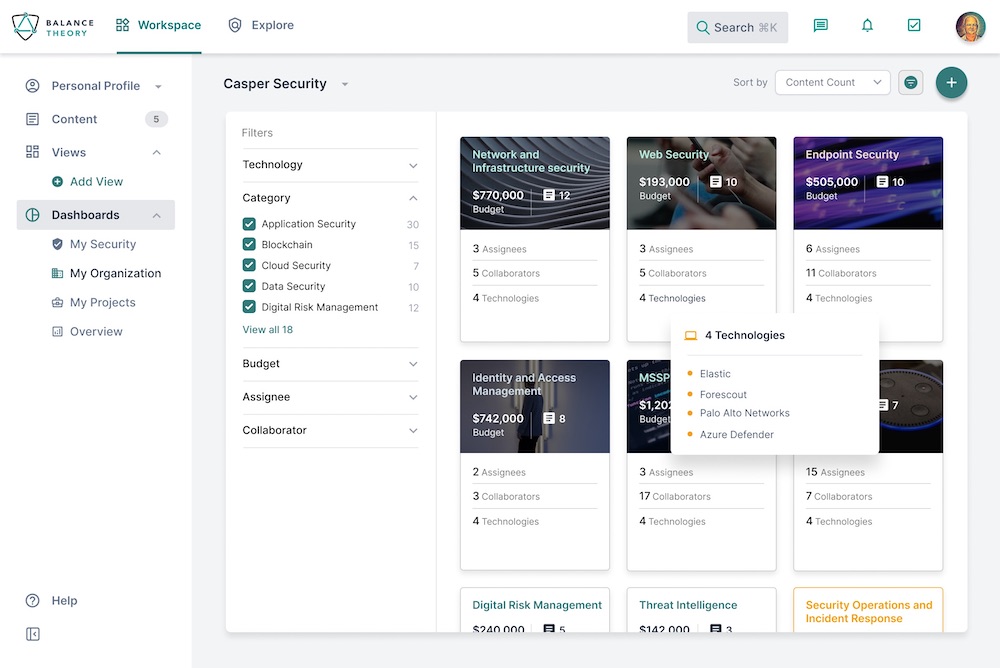 “The reality [is] that most cybersecurity teams are underwater,” Baker said, adding that those technologists “need to find ways to make it easy to share that knowledge within their organization, to communicate it more effectively, but then, also, to protect it.”

Baker co-created Balance Theory on the heels of his working with Denver, Colorado information security company Optiv Security in a variety of leadership roles enabled by Optiv acquiring another of his companies, Decision Lab, back in 2017. These prior experiences informed his approach to Balance Theory’s platform and expansion, which he hopes could make this latest company “the home for cybersecurity” in the next 15 years. Reaching that admittedly ambitious benchmark, he said, would involve Balance Theory anchoring a community of cyber professionals and thought leaders at all levels of the industry, from scholars advancing innovative practices to practitioners to other cyber companies to the clients that could benefit from more in-house knowledge.

In the shorter term, Balance Theory is implementing the platform for select enterprise clients that he declined to name at present. That process, along with updating the platform and expanding its potential client base, will eventually lead to a Series A further down the road, he said. But until then, Baker and his colleagues are principally focused on making sure the product is actually tackling the problems that these enterprise clients might want to see.

To that end, he invites anybody interested in Balance Theory’s possible solutions to pre-register on the startup’s website. Such early registrants will get to follow insights and updates as Balance theory keeps building the product and a community of potential users. He also anticipates more hiring and openings, as well.

“As we continue to build this community out around how the platform is progressing, but also what it means — as an individual as well as an enterprise — to be on the platform, we are consistently meeting with these folks and getting their advice, showing them what we’re building,” he said.