It’s often said that if you go into tech, you’ll be fine, there are plenty of jobs. You don’t even need a four-year degree to get a well-paying position in this industry.

But what’s talked about less often is people’s journeys to landing their first role. It’s not always as simple as applying, interviewing and starting.

Ian Kimble told Technical.ly he’s always had an interest in learning how things work. He went to Penn State for political science, but ended up working as an insurance salesperson. In his time off, he learned about web development through articles, blog posts and YouTube videos. His genuine curiosity drove him to start teaching himself about it.

Kimble said he was motivated to actually pursue web development because of the prospect of more money, but also because he wanted a more rewarding career — “feeling a certain degree of satisfaction in the work that you’re doing, being in a position or in a career where you’re always learning and building on what you’re learning, and even revisiting and maybe reassessing the things that you know,” he said. “Web development and engineering is something that changes constantly. So, it’s very dynamic in that way.” 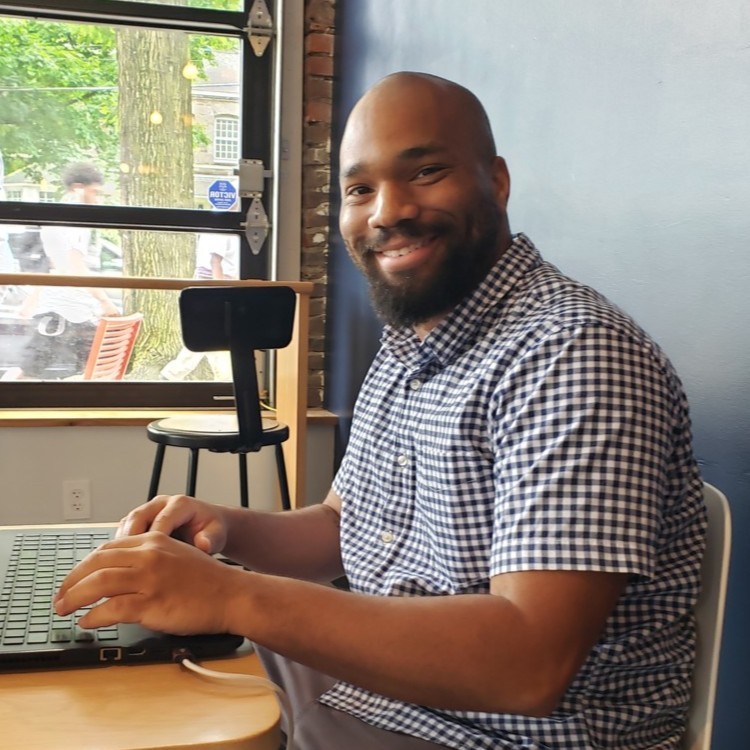 Eventually Kimble saved up enough money to enroll in the University of Pennsylvania LPS Coding Bootcamp. During this time, he was working for an insurance company during the day and attending web development bootcamp at night.

He completed the bootcamp in 2018, but had a hard time finding a job.

“It was challenging because there’s that catch-22 of trying to get a job without experience, but not getting the experience because you don’t have a job,” he said. He started taking on freelance projects to continue adding experience to resume.

Kimble credits his time as a freelancer building his network and portfolio as helping him finally land his first big role as a a software engineer at Change Machine in 2020, two years after finishing his bootcamp.

Ryan Small said he never really considered a career in tech. “Software developer” as a title hadn’t been presented to him as a kid.

Small attended the Art Institute of Philadelphia for graphic design, but didn’t finish college. He eventually went into banking and did that for a decade before craving a career change. Around 2016, he left banking, went into sales, and started thinking about what he really wanted to do next.

In 2018 he started playing around with HTML and coincidentally, multiple people in his life sent him information about the bootcamp Zip Code Wilmington.

“I felt like that was kismet in a sense,” he said. Zip Code Wilmington had partnerships with hiring companies that gave Small the opportunity to interview for jobs, but he said what he learned in the bootcamp wasn’t really sticking with him. He struggled to land a job after graduating in 2018.

“As a Black man with locks — and I had locks at the time — you kinda gotta be extraordinary. And I wasn’t, I was just kind of like mid-level at the time,” Small said. “Because a lot of these rooms you walk in, you still get a weird vibe. Maybe you feel like you don’t belong there. It doesn’t help with your confidence.”

Small decided to pivot to freelance frontend work and using his design skills again along with doing odd jobs to make ends meet. He continued to look for jobs doing back-end work and using those skills as well.

In 2021, Small finally landed a job at JPMorgan Chase as a software engineer. After a year, though, he wanted a change, and found his current job as a full-stack software engineer at enfuse.io.

Khalil Saboor’s journey with tech started all the way back in high school when he got into a STEM program at Temple University that taught him how to use Java. He went to Arcadia University for a year as a computer science major, but left school because he couldn’t afford to continue.

He got jobs at Starbucks and a gas station and taught himself about coding through free resources and meetups. He hit a point where he wanted to learn more, and eventually got a scholarship to Zip Code Wilmington. He finished the bootcamp in 2018. Same as Small, Saboor had the opportunity to interview with partner companies, but those leads didn’t pan out. He also got pushback about being too young for a bootcamp at age 22. He eventually went back to Starbucks after not being able to land a job.

“I felt like I was kind of stuck here,” he said, and “just kept going and meetups, kept meeting with people and kept coding every day and pushing that code on GitHub.”

As Saboor continued to freelance and network, he eventually connected with someone at an event that helped him get an 18-month position at GSK where he tried out different engineering teams. He ended up working there for about three years. In January of this year, he landed his current role as a software engineer at American Express.

Small and Saboor met through Zip Code Wilmington, while Kimble met Saboor at a coffee shop in downtown Philadelphia. The three came together to create a network of Black tech professionals that is open to people of all skill levels.

Kimble’s own career journey exemplifies the importance of building a network.

“Through a couple of different conversations, we thought about this kind of knowledge sharing where it’s like, obviously we’re not the only ones that have experienced this,” he said. “We won’t be the last people to experience this, but perhaps we can create a network of people who are in similar places where maybe they want to get into tech, maybe they want to get a career change or if they’re younger, maybe they’re interested in it, but don’t quite have the resources or network to start.”

Saboor said he wanted to start Black Tech Philly as a club for people at local tech companies to come together and support each other — especially because of his experience being the only Black person on most engineering teams.

Small noted that it’s important to have spaces where people who look like each other and have similar experiences can come together. He didn’t always have that, and knows it helps to get support from a community.

“We know it’s hard for people of color, for Black people especially, who don’t have necessarily a full computer science background to break into this field. It’s difficult. Like I said, you have to be extraordinary,” Small said. “We feel like that shouldn’t be the case.”

Kimble’s advice to people in the earliest days of launching their tech careers? Keep going.

“Rejection is natural. You can grow from that,” he said. “Also, think big. When you feel uninspired, but you have this passion, focus on projects that you want to build.”

Part of having that network of people to learn from and teach is knowing that you’re not alone if you are struggling, Kimble said. This is especially true for Black professionals who don’t have as much representation in tech and may feel isolated in some company cultures. The Black Tech Philly cofounders want these people to know there is a community for them to pursue their passions in tech.

For Small, it’s important for people to know their options and to never think a given role or field isn’t for them.

“It’s absolutely for you if you’re adaptable, if you’re a quick learner,” he said — “if you’re just someone who can adapt and learn and communicate with people and not be afraid to ask for help. The sky’s the limit.”

Sarah Huffman is a 2022-2023 corps member for Report for America, an initiative of The Groundtruth Project that pairs young journalists with local newsrooms. This position is supported by the Lenfest Institute for Journalism.
Series: How I Got Here Month 2022
Subscribe