We’ve been at the precipice of a maybe-recession in recent history.

In a moment of near-déjà vu, business owners and economic leaders gathered last Friday to hear FS Investments Chief US Economist Lara Rhame’s take on the current state of the economy. It mirrored the last time the Chamber of Commerce for Greater Philadelphia gathered in person for its signature Economic Outlook event in 2020: a blustery January morning, a packed auditorium at Philly’s Bellevue Hotel, and the feeling like we might be heading into a recession.

Back in early 2020, Rhame named that we were likely on the precipice of an economic downturn, though she explained why Philadelphia might fare better than other cities. What we weren’t aware of yet, was how the incoming COVID-19 virus would impact, well … everything.

Three years later, Rhame stood on a different stage, this time at the Kimmel Center, with similar sentiments.

“Here’s the tough part — don’t kill the messenger,” she told attendees. “The probability of a recession in the coming year has risen. And if we don’t have a recession, it’s unlikely to be a year of really robust growth.”

GDP and the labor market

Economists look to gross domestic product (GDP) as the broadest measure of the US economy’s growth, and although 2021 started with strong growth, it was unsustainable, Rhame said. And since then, GDP has seen a rocky deceleration. International factors that grew worse in the pandemic, like inventory swings and trade hiccups, continued to be challenges in 2022.

“There is resilience, there’s medium-term opportunity, but we need to be prepared for, perhaps, some continued challenges this year,” Rhame said.

For most of 2022, GDP grew less than 2%, below pre-COVID levels. But economists don’t just look at GDP for signs of a recession, Rhame said. The labor market also plays a large role, and 2022 was a great year; the US added 4.5 million jobs. Job losses are a hallmark of a recession, and the job gains of 2022 keep the recession talks at bay, per the economist. The US ended the year at 3.5% unemployment, the lowest in about four decades.

Rhame also mentioned the frequent layoffs we saw at the end of 2022. While it doesn’t look or feel good to see job losses like that, they played a small part in the hundreds of millions that make up the US workforce, she said. 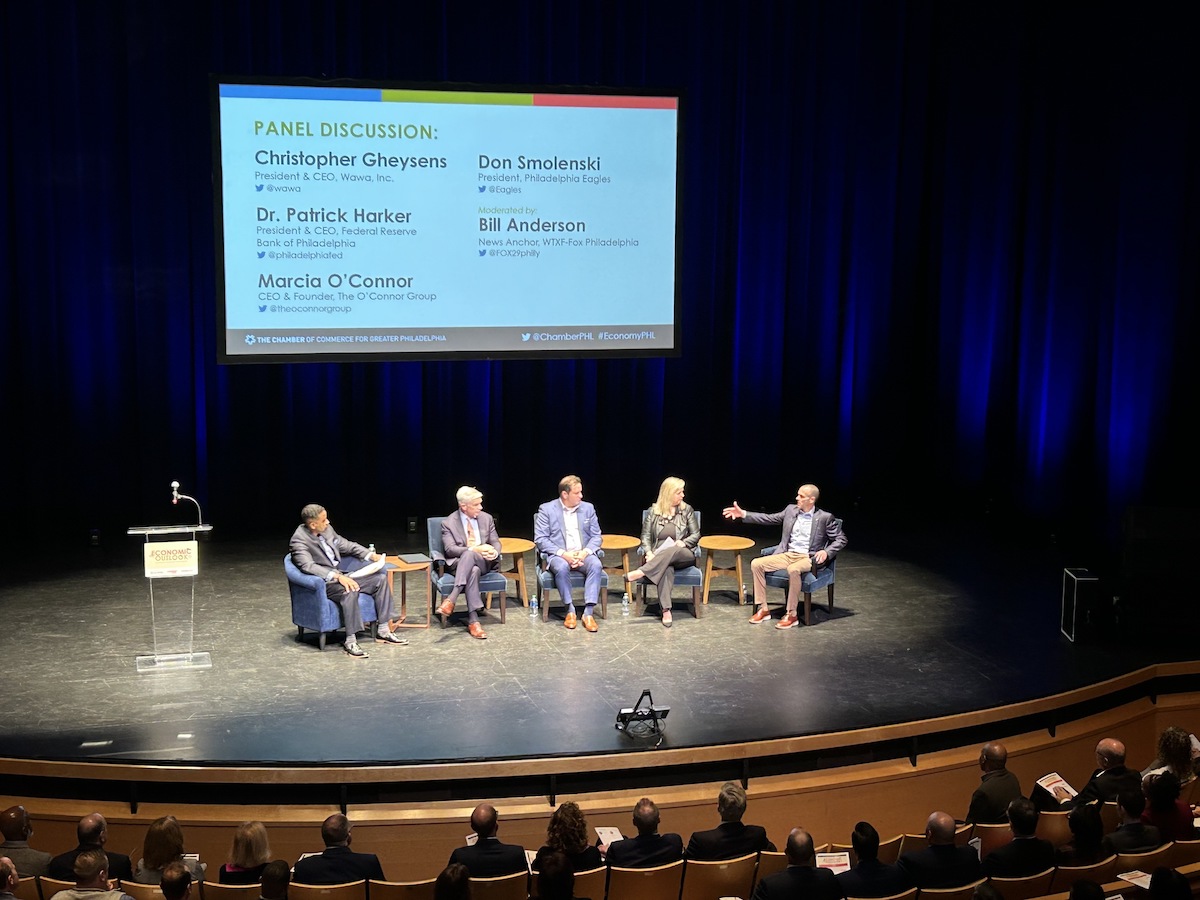 A Philly business panel at the Chamber of Commerce’s 2023 Economic Outlook event. (Photo by Paige Gross)

Inflation is an unavoidable part of the conversation, she said. It peaked at just over 9% in mid-2022, and settled around 6.5% by the end of the year — much, much higher than the 2% Americans had been used to for years.

Rhame predicts that inflation will slowly steady out this year, not to its normal year-over-year level, but maybe to around 3.5% by the end of the year. And to combat it, the Federal Reserve System has responded with rapidly raising rates, the most aggressive since the 1980s. Many Americans are feeling the squeeze.

“It eats our savings, our wages and our investment returns,” she said.

But if a recession is coming, Rhame believes it will be more mild. The housing market is a great predictor — “really ground zero for how higher interest rates and fed policy impacts the economy.”

The Fed has raised interest rates, and housing affordability as a share of household income is also at the highest it’s been since the 1980s. But the structural element to the housing piece of the economy includes the fact that the US has been “under-building” homes. The same is true with the auto industry, which saw massive changes amid supply chain issues over the last two years.

The slowdown in these markets are hitting millennials, who are at peak home- and car-buying years, and are facing the worse inflation in decades. Despite these factors, Rhame called out structural reasons, like the $65 billion federal infrastructure bill from 2021, that mean the US will want to build and continue to increase business spending in 2022.

Not all recessions are the same

“As we look ahead, and we think about where our economy is going, it’s important to recognize I don’t have perfect crystal ball,” Rhame said. “A recession is not a foregone conclusion. We’ve had a wide variety of recessions.”

Most people remember the last two, Rhame said, which were severe. But we’ve also had lesser ones, like in 1990 and 2001 that were “rather short lived.”

“We have downturns that are more mitigated because we have this medium-term resistance,” Rhame said. “So, as we look ahead, there are some macro economic challenges, but I see a lot of reasons for positivity and for the ability for all of us to navigate these.”