About Fastmail Find Out More
TOP ARTICLES
1
A $641K DoD grant reinstated Maryland’s DefTech Center for defense innovation
2
Moving to Mastodon? Here’s how to select a server for individuals and businesses
3
Verismo Therapeutics is building out an R&D facility at an expanded CIC Philly 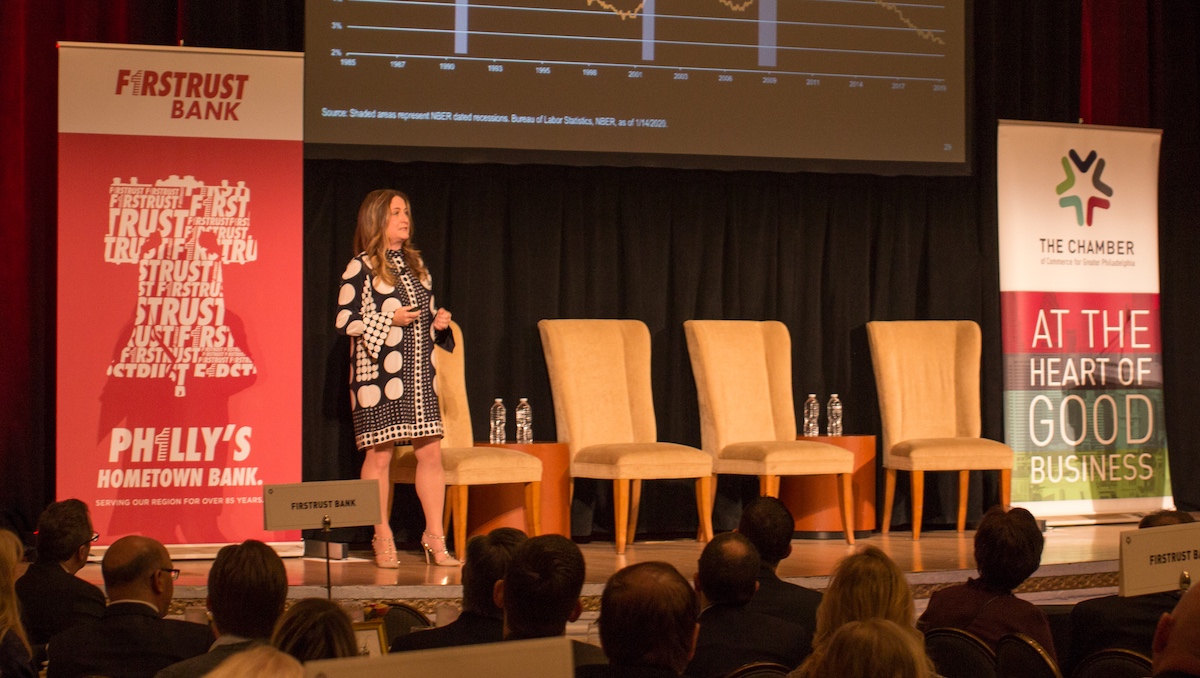 Heading into 2020, the country’s growth momentum is about 2% lower than it was coming out of 2018, according to FS Investments Chief U.S. Economist Lara Rhame.

But this isn’t necessarily bad news, Rhame said. She likened it to “cruising at a lower altitude,” essentially, after a year of a lot of growth, the market is leveling out to a more consistent level.

“This concept is about where the plane usually is, where it spends a lot of time,” she told a crowd at the Bellevue Hotel Friday morning. “It’s the same concept for the economy.”

Local business buffs were gathered to hear what leading economists and biz leaders predicted for the next year and decade for the regional and greater economy at Economic Outlook 2020: Forecasting our Economic Future Together, hosted by the Chamber of Commerce for Greater Philadelphia.

The strength of the economy can usually rely on three factors, said Rhame, the event’s keynote: consumer, government and businesses spending. And while the outlook for business spending isn’t as certain for the next year, Rhame said she feels comfortable that consumer spending (which accounts for about 70% of the real GDP statistics) was strong going into this decade. She’s even seeing the average household “pad” themselves a bit more with higher levels of savings.

— The Chamber of Commerce for Greater Philadelphia (@ChamberPHL) January 17, 2020

But when it came to the topic of recessions, Rhame said it’s similar to an unfortunate reality that she has to present to her children.

“Listen, it’s like I’ve had to tell my kids — the dog will die some day,” she said. “That’s certain, and it’s certain we’ll go through future recessions.”

But after her keynote, Rhame told Technical.ly why it likely wouldn’t be as bad as the 2008 recession and wouldn’t hit Philadelphia as hard it would other cities and regions.

Our economy naturally wants to grow, she said, so for a recession to happen, something would really have to knock it off course. Further evidence that we’d see a lesser hit than in the past is that economists don’t see as many bubbles growing, nor wage pressure or proposed policy upsetting the current natural growth, she said.

And because Philadelphia’s economy has a very strong makeup of industries like education, healthcare and some defense, which are more stable, a hit to the larger economy wouldn’t be felt as badly here. (Economy League of Greater Philadelphia came to a similar conclusion in its report, “Is Philadelphia Heading for a Recession? What Do the Data Say?”)

It’s normal that recessions hit harder in some areas than others, especially in areas with less steady industries. Rust Belt areas were hit hard by de-industrialization and tourism spots like Miami and Central Florida were hit hard during the early 1990s recession, CityLab reported. Resource-rich metro areas will always be less affected than their one- or two-industry counterparts.

This places Philadelphia in a sturdier position when the country heads into its next downturn. After all, people will always go to school and always get sick.

“The downside is that when the economy is really booming, we don’t get as much of that positivity,” Rhame said. “But when it’s down, we also don’t sink as low.”