Kevin Plank allowed momentarily that a whiskey business may not be the most obvious offshoot of a sportswear company.

“My business is sports, health and fitness, but the things I like to do are horse racing and whiskey,” the Under Armour founder told a crowd of UA and political dignitaries like Maryland Gov. Larry Hogan and Baltimore Mayor Stephanie Rawlings-Blake on Wednesday. “This is a conflicted man on many levels,” Plank quipped.
On a personal level, Plank explained this dilemma by reciting a speech from Noah “Soggy” Sweat.
Then there’s the business side. Plank said he sees all of his additional businesses as having a “relevant, tangible benefit” to Under Armour. In the case of the rye whiskey company, which he cofounded with Bill McDermand and is called Sagamore Spirit, the connecting point is Sagamore Farm in Reisterstown, Md. The company intends to make the rye whiskey using water from a spring on the farm, which is filtered through a bed of limestone. But everything at the Baltimore County farm points back to its longtime, primary purpose: training thoroughbred racing horses.
Building on a pedigree that includes Vanderbilts and hall-of-fame horses, Plank said he wants the farm to become Baltimore’s “third sports team,” with fans following not just the Preakness, but the horses who Sagamore has in the Triple Crown races.
“We want that Oriole pride, we want that Raven pride to exist for our third sports team as well,” he said.
Sagamore Spirit’s waterfront distillery in South Baltimore’s Port Covington neighborhood is seen as a way to introduce people to the farm. In addition to a distillery and processing center to make the whiskey, the five-acre property across from the Baltimore Sun plant at 301 Cromwell St. is also slated to have a visitor’s center and tasting room for tours that feature info about the farm and water, as well as the look and feel of the place. There will also be a restaurant to get folks to stick around. A rendering from above. (Courtesy of Ayers Saint Gross)

Plank sees the entire Port Covington redevelopment project, which also includes a new headquarters for Under Armour and giant innovation hub at City Garage, as a “front porch” for Baltimore (and UA, of course) that people can see driving into the city on I-95. The 120-foot water tower at the distillery is seen as one of those easily visible spots. And going with that theme, it’s easy to see the distillery is a front porch of sorts for the farm.
“Port Covington was this old industrial land, so the idea was how do we make it cool? How do we make coming over here a great thing?” Plank said. “So, I don’t know, what better than whiskey to make it cool?” 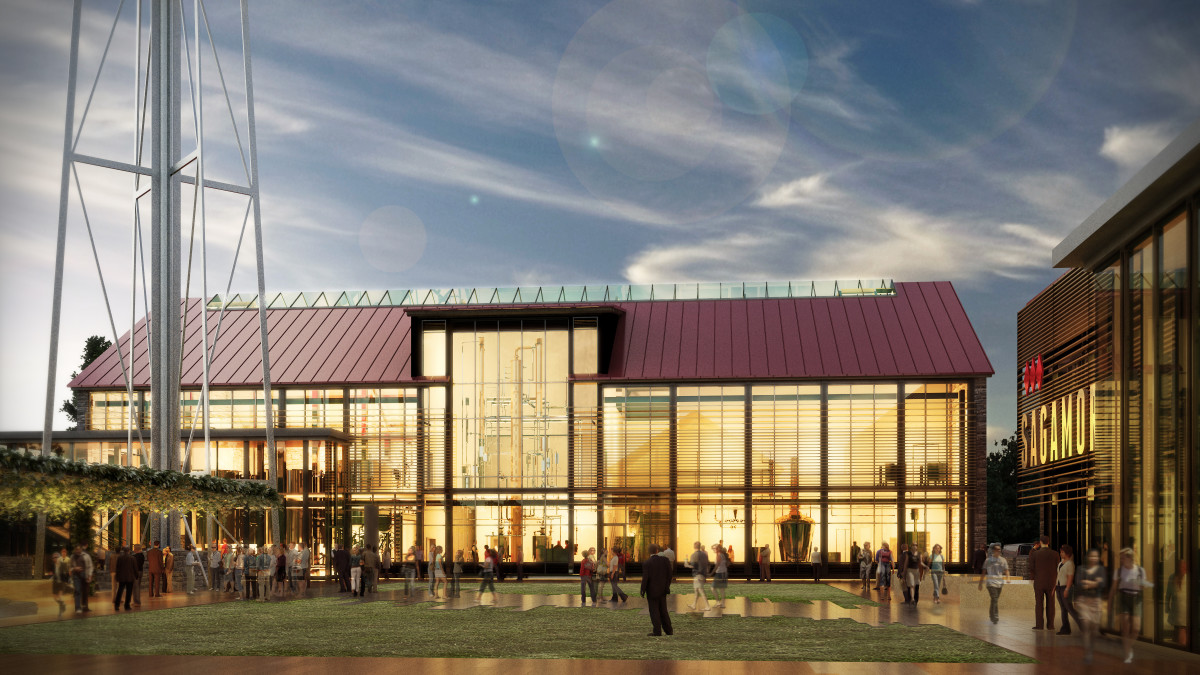 A rendering of the forthcoming Sagamore Spirit building. (Courtesy of Ayers Saint Gross)

Of course, it’s also a business that’s looking to sell some whiskey. But that’s also a Baltimore thing.
Up until Prohibition and before World War II shifted manufacturing efforts, rye was much loved in Maryland. Baltimore was a home for the industry, with multiple brands produced here. Even the property where Sagamore Spirit sits once housed a distillery.
During construction, Sagamore Spirit bottling operations are being handled at City Garage. Asked about production plans and how many people they would employ, McDermand and Sagamore Spirit President Brian Treacy declined to provide numbers. They’re starting small, with a 10-person team led by Larry Ebersold, formerly of Seagram’s. With Plank’s investment into the effort, McDermand said that “it will take time” to refine the product before ramping up. How the Sagamore Spirit site looks now, for posterity. (Photo by Stephen Babcock)

“We have the ability to up capacity as we grow and perfect that, but right now we’re focused on making sure we have one great product that can stand up,” McDermand said.
No tastes were available on Wednesday, so we’ll have to wait to see what it’s like. In a nod to one of Baltimore’s best-known roads, it will be 83-proof.
The distillery is scheduled to be open in late 2016.