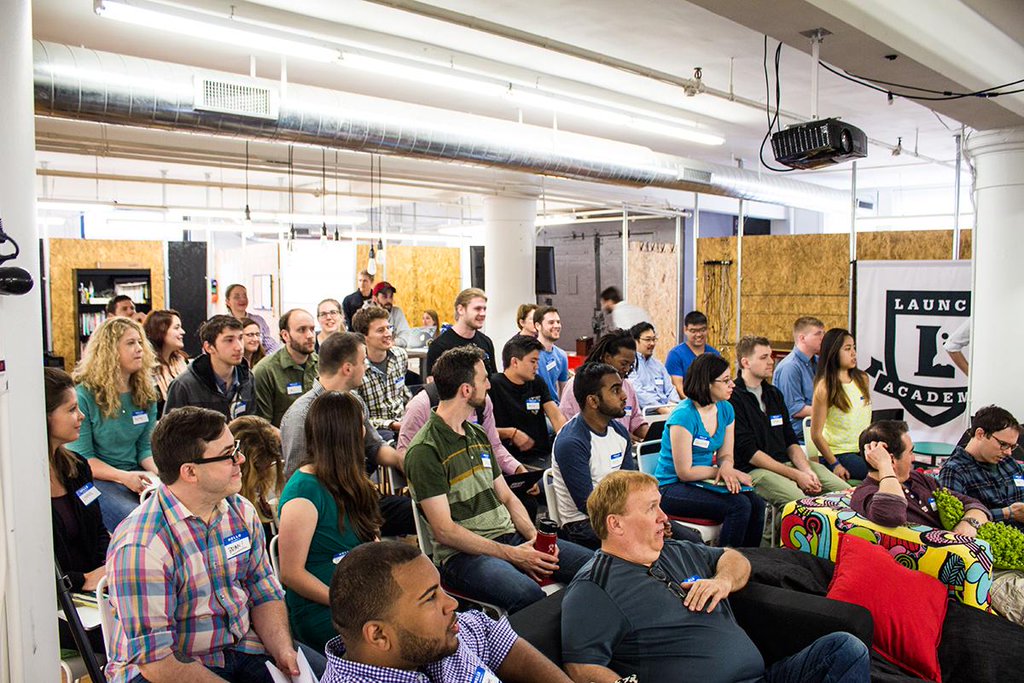 At a Launch Academy class in Boston.

There’s a tinge of nostalgia behind Launch Academy’s decision to plant its flag in Philadelphia.
“Philly is very reminiscent of Boston when we started Launch Academy in 2012,” cofounder Dan Pickett told Technical.ly. “There’s a growing tech scene, and with that, an emerging talent gap.”
The bootstrapped Boston-based coding bootcamp is one of the new tenants of Benjamin’s Desk’s 1608 Walnut St. location, which soft-opened last week. (Emphasis on soft. It’s functional but much of the space is unfinished.) The firm just got licensed by the Pennsylvania Department of Education and recently kicked off an eight-week prelearning program at Ben’s Desk called Ignition with a cohort of 12 students and three on-site educators.
One of those three is a familiar face: former P’unk Ave dev Kylee Acker, a Launch Academy grad herself.
Director of Business Development Corinne Babel will also be on the ground here in Philly as of January.
(You can apply here for the upcoming Summer 2017 program, which kicks off March 6).
Launch Academy considered five markets for its next site. So besides the 2012-era Boston nostalgia, what made the case for Philadelphia? “For us, it was all about the potential market: a competitive landscape and open jobs for our developers,” Pickett said.
Launch Academy’s 10-week program promises to take someone with no previous coding background and get them ready for an entry-level job in the field. At a $15,000 tuition (pricier than New York Code & Design Academy’s $10,000 full-time program here in Philly), the company pledges post-graduation support and guidance as part of the package.
“We look at the relationship between our school, hiring companies, and aspiring developers as a three way partnership that ultimately helps to make metropolitan economies stronger,” Pickett said.
(If you’re on the search for a job, don’t miss our tech jobs fair NET/WORK on Feb. 7 at The Fillmore.)
Given the thirst for tech talent in town, you might think Launch Academy would be joining a crowded field of full-length bootcamps. Options are actually not that varied. You have Horizons Academy, the coding bootcamp for students; New York Code & Design Academy, which expanded to Philly back in 2014 and now Launch Academy. There have been some brief experiences like that bootcamp Zivtech and Neomind Labs put together thanks to a StartUpPHL grant. Or that time when the Flatiron School posted up in Philly for a remote course (which is no longer active).
(There’s also Sylvester Mobley’s Coded by U, the for-profit arm of Coded by Kids, but that organization focuses more on delivering workshops for private schools, companies and government agencies.)
In a way, Philly will be a test-balloon for Launch Academy’s model: Pickett said 2017 will likely see the company popping up at another city, though he did not disclose which one. Let’s see how Philly greets the out-of-towners.