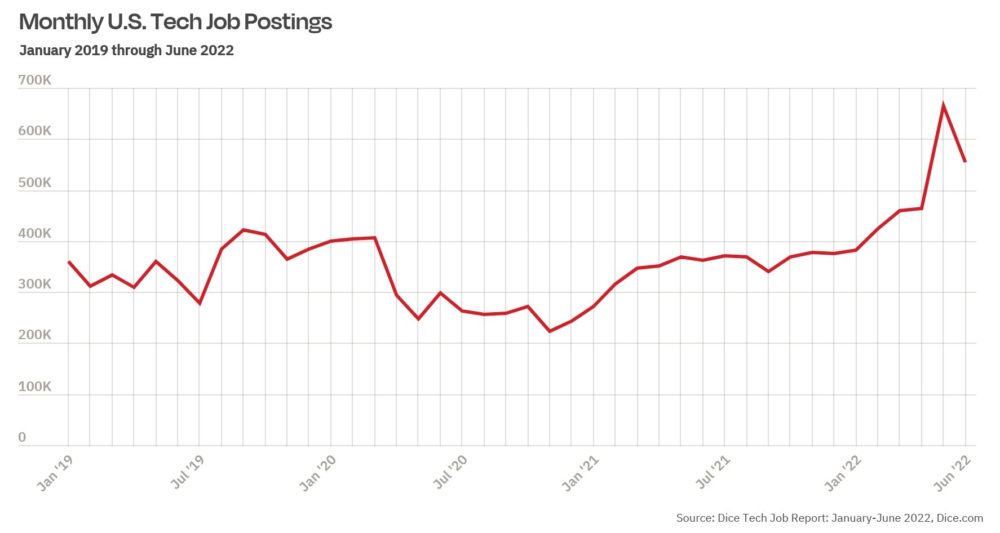 Tech hiring spiked in May 2022, and is predicted to hold steady.

It seems like everywhere you look, tech jobs are being cut at big companies from GoPuff to Netflix.

So it may come as a surprise that, according to the Dice Tech Job Report for the first two quarters of 2022, tech jobs listings actually grew by 60% compared to this time last year.

In short, almost everyone.

Nearly all of the top 50 employers — 96% — increased hiring between 2021 and 2022. That includes Google, Amazon, Microsoft and Disney, as well as many of the big finance companies, including JPMorgan Chase, Bank of America, PriceWaterhouseCoopers, Wells Fargo and Deloitte.

A big takeaway here is that some of the biggest employers of tech talent are not companies that are traditionally thought of as tech companies. In addition to the finance industry, healthcare, energy and manufacturing are other industries creating new tech jobs.

What kind of tech jobs are out there?

Software engineers, business analyst and data analyst jobs are still booming, so if you’re debating getting a certification to make a move into tech, it’s still a good time to do it.

Few tech jobs aren’t seeing some growth — only one had zero growth since 2021, and that was web developer.

Here are the top 15 tech occupations by job posting growth: What skills are employers looking for?

By volume, the top skills companies are looking for include Agile methodology, SLQ, Python and Java, as well as the ability to troubleshoot.

By job posting growth, employers have increased searches for talent with skills in cloud computing, TypeScript, Go, R and CSS.

Here are the top 15 tech skills by job posting growth: Where are the tech jobs?

The big tech hubs like San Francisco, Chicago, New York City and Atlanta are staying big, with continued growth. Although it had 56% growth, Seattle dropped out of the top 10 tech hubs in 2022. Don’t live in a major tech hub? Most states are seeing growth in tech hiring, including Alabama (120%), Iowa (118%), Louisiana (136%) and Vermont (171%). There are five exceptions where tech hiring has dropped: Alaska, Wyoming, West Virginia, Montana and North Dakota.

If you have the skills (and good broadband), you don’t have to live in a major tech hub: Remote work is still an option for many companies, and job boards will allow you to sort by remote if that’s what you need.

Will the growth decline in the second half of 2022?

May 2022, ending out Q2 and the scope of this analysis, had the highest spike in job listings. Dice notes that June did see the first decline month over month in the year reviewed, but doesn’t see it as a signal of anything dire.

“The decline can be attributed to not only an overcorrection to May’s spike and reaction to talk of inflation and a bear market, but also to a seasonal trend seen in previous years,” Dice noted among its key takeaways of the report. “In 2019, there was an 11% decrease in tech job postings between May and June. Even so, postings are still up 60% in June 2022 compared to June 2021.”