About Crossbeam View Open Positions
TOP ARTICLES
1
Gloria Bell just launched her own nonprofit to run the Women in Tech Summit
2
What does Roe v. Wade’s overturn mean for your tech? Here’s what you need to know
3
With a tech overhaul, fintech startup Philanthropi is expanding its personal giving platform

Over 1,000 of our favorite people showed up.

Around 1,000 people (!) dropped by our annual Super Meetup, smack dab in the middle of Society Hill.

A huge THANK YOU to the +1000 people who joined our #SuperMeetup today. Long live the Philly tech community! pic.twitter.com/JyRjE2R69p

Whoa. That’s almost twice the size of last year’s Super Meetup at the same spot, The Shambles at Headhouse Square.
Was the surge due to the 50 pizza pies the Philly New Technology Meetup brought? Was it the popsicles by WebLinc? Was it the summer-y vibe of the outdoor event? The swag? All of the above? Hard to say.

If the boost in attendance was a sign of anything, it’s of the growth of the tech scene’s reach: more companies, more hires, more clients and definitely more meetups. Thirty-one, to be precise, with several names that weren’t at the event last year.
If I thought that dinner I went to in the suburbs had been a mingling of all the people I’ve interviewed so far, maybe Super Meetup was a meeting of folks I’ll soon be interviewing.
There were developers meeting up with artists. Startup founders trotting up and down the venue looking for investors. Company reps exchanging cards and thoughts on the next big thing in analytics.
And elevator pitches. Plenty of them.
But none of this would happen were it not for those 31 regular tech meetups and the networking capital they represent.
There’s something to be said about the persistence of committing a day out of your week or month to talk about what you love, and the connections yielded from this event were a testament to its value.
The roar of the crowd also speaks to how tight the tissue of Philly’s tech community is woven together. Yes, there were a lot of stuffy, first-time introductions in the main area, but a walk through the sidelines would lead a bystander to think it was a big high-school reunion.
As I went home with a pocketful of business cards, sharing an Uber Pool with two local devs, I remembered what MentorTech Ventures’ Brett Topche said recently: a team which has proven to work well together, with a record on delivering, is worth the investment.
If the evening we spent mingling in Society Hill is any indication, Philly’s tech scene is certainly a community capable of playing well with others and, therefore, a solid bet.

For more photos, check out this great set by Indy Haller Reed Gustow: 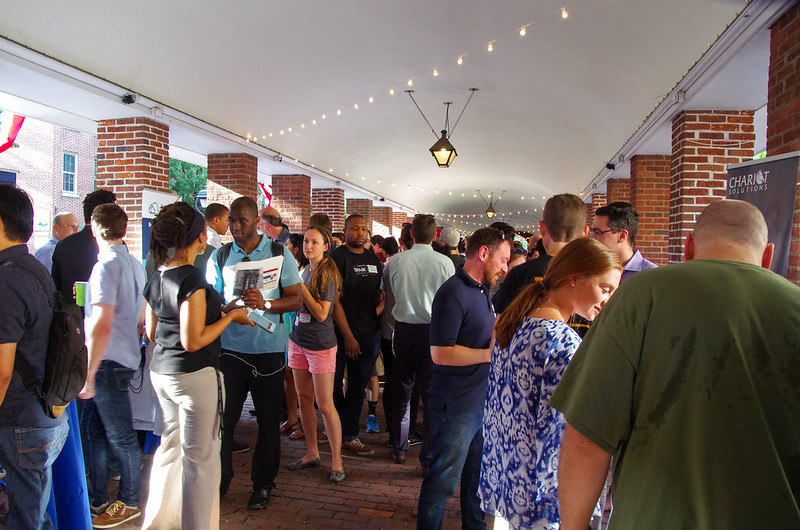 Bored Apes, pizza and talk of the city’s cultural future at the first NFT Philly meetup

Want to boost your cybersecurity skills? Start with these 12 Philly resources

Marvin Weinberger’s Makers Meetup is returning from a pandemic hiatus

Want to learn about blockchain, crypto and Web3 in Philly? Start here