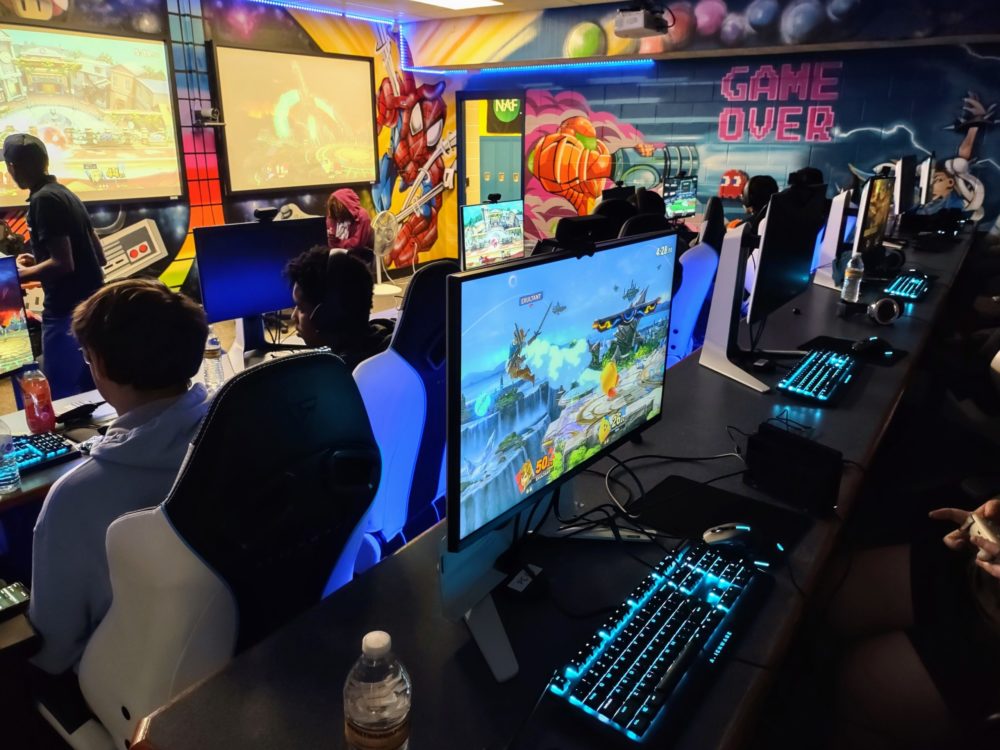 Two years ago, Futures First Gaming appeared on the scene with a mission to put Delaware on the esports map.

A big part of the vision of its founders Stephen Sye, Malcolm Coley and Newdy Felton was to put esports in state schools — not just as a competitive sport, but as a Pathway for high school students interested in careers in the gaming industry.

This week, that vision took shape as Alexis I. du Pont High School (AIHS) officially launched its esports program with a Super Smash Bros. tournament in its new esports arena-slash-classroom.

The arena, modeled after the esports arena the University of Delaware launched in 2019, was developed over the summer after the program pulled together the funding. In addition to computers, consoles, monitors and screens, the room was designed with tiered levels and, perhaps most eye-catching, a full-room video game mural by artist @fiacono360.

When the students started the school year two months ago, they had no idea that an esports arena sat behind the closed classroom door.

“We teased it in September and October,” AIHS Principal Kevin Palladinetti told Technical.ly. “We wanted the hook and the wow factor. And then once we get them here, we’ll also have career opportunities.” When the doors finally opened earlier this month, the students burst into applause, and an after-school club was formed. Coached by AIHS digital media teacher Jamie Varsalona, the club is stage one of the project, building up the space as a working arena and showcase for middle schoolers choosing a public high school.

For those not familiar with Delaware’s public school system: The state uses a choice system, and each high school has its own roster of workforce development programs, aka Pathways, to help kids on their career or college tracks. Since 2015, Pathways has transformed public high schools with state-of-the-art facilities, including professional TV and film studios, commercial kitchens, robotics labs and even fully functioning farms.

AIHS had long been known for its marching band, arts programs and college prep, but in recent years it fell behind as a major draw for students under the choice system. With the esports program, Palladinetti aims to change that, along with esports’ reputation with some parents as unproductive.

“This isn’t just your kid at midnight playing in the bedroom,” he said. “There’s competition behind it, but then there’s also classes and different avenues they can travel. All of a sudden they become aware of this massive market out there.” Seating is tiered in the AIHS esports arena. (Photo by Holly Quinn)

University of Delaware’s esports teams — and its scholarships for esports athletes — has helped to give the program legitimacy as a real, productive path to college and a career. The AIHS program by no means begins and ends with playing games, as students (and their parents) learn about the many career opportunities in the industry, which ranges from things like programming and development of games to a range of behind-the-scenes jobs.

“The Pathway will cover all of the digital skills that you need for 21st century workforce,” Coley said.

The goal is to have the proposed esports Pathway fully approved by the Delaware Department of Education — not a quick process — and have students studying esports beginning next school year. The esports pathway, which will technically be a part of the existing digital media Pathway, is just the beginning of the changes Palladinetti hopes to bring to AIHS in the next few years.

“We’re hoping, fingers crossed, for an audio engineering Pathway, a full-blown recording studio,” he said. “We see future courses for gaming would be a perfect complement for students that want to lay down their tracks. Gaming, soundtracks — we’re hoping to appeal to this generation of students on their creative level, but also as an opportunity for employment.”

As the tournament was about to begin, Sye announced that the winner would receive a trophy and an automatic entry into Futures First Gaming’s Pandamonium tournament on Dec. 3 at Wilmington University’s Brandywine Campus.

“No pressure,” Varsalona said with a smile as the students visibly react to the possibility of making money through esports so soon. You can watch a replay of the tournament of the team’s Twitch (@aihsesports), and follow to catch up coming livestreams.