Correction: The Cube is not affiliated with the Function Coworking Community, as previously reported. (2/24/22, 9:05 a.m.)

The pandemic saw a massive shift in work that hit coworking hard like every other facet of life.

WeWork decided not to renew its lease, Workmode has yet to arrive, and companies like Mindgrub are moving to the metaverse. Despite this change, coworking persisted, especially by local companies that are focused on catering to startups in the Baltimore area.

But remote work hasn’t meant the death of coworking spaces. It allows remote workers a break from home, a space to work in peace for as long as you like and to connect with people face to face for meetings and general networking. That’s valuable.

Coworking spaces in Baltimore are leaning into the community aspect and many provide services beyond flexible leases and cheaper rent. They offer accelerators, tech industry training programs and incubators. Or, like Open Works manufacturing desk for virtual schooling, they use their resources to solve gaps in the community.

After a pandemic hiatus, Technical.ly’s coworking guide is back. Let’s take a look at what coworking spaces in Baltimore have to offer, and what’s changed since 2020. Did we miss anything? Email us at baltimore@technical.ly.

The city’s original coworking space is still thriving after almost a decade. The Emerging Technology Centers-backed coworking space is co-located with ETC’s incubator programs and regular events. (Full disclosure, this is also Technical.ly’s home base in Baltimore.) Natty Boh Tower is growing as a destination for tech startups and creative firms, so it’s only natural that the building would have a coworking option. Brewers Hill Hub has a mix of offices, suites and desks. Plus, the roof deck has prime views of the harbor — and Mr. Boh.

Opened in late 2013, this space inside a former rowhouse is tailor-made for freelancers who need a desk away from home. Along with tech types, it’s also inviting to writers and other small business owners.

In April of 2019, coworking gained an address on The Avenue, as Co-Balt Workspace opened in Hampden. It’s also one of the most distinctive destinations: Many of the spaces on this list are inside repurposed spaces, but no others used to be a church. Dating to 1899, the building is now home to small firms and entrepreneurs.

Since debuting its initial location in 2015 at the house that John Pendleton Kennedy built in Mt. Vernon, the Par Collective’s CO-OP has provided space for companies and expanded its footprint. A second location in Station North came online in 2017. They’re both geared toward growing companies that are ready to get out of the incubator, and get stuff done. Outside the CO-OP at Maryland Ave. (Courtesy photo)

Opened in March 2016, this design-forward coworking space is owned and created by Megan Elcrat and Philip Jones of architecture firm 33:Design. The space features a mix of coworking, private offices, breakout areas and a conference room with a roll-up garage door. In late 2017, it also added a design bookstore to the neighborhood. More than 100 years after opening, 1100 Wicomico is emerging once again as a hub for businesses in Southwest Baltimore. Alongside manufacturing, design, robotics and consumer product tenants, coworking is also part of the offerings. Along with the shared workspace itself, tenants also get access amenities throughout the building.

Opened in 2016, this company has decided to pivot during the pandemic. Cofounders Dr. Tammira Lucas and TeKesha Jamison have decided to offer their babysitting services to coworking spaces as a resource. The company now offers these services at a new location in Baltimore city’s Hamilton-Lauraville neighborhood.

Located within the bwtech@UMBC Cyber Incubator, founders and student interns have access to the CyberHive coworking space. The space is designed to position startups near entrepreneurs in residence, potential strategic partners and the University of Maryland Baltimore County, which itself is a hub for cybersecurity.

Johns Hopkins identified space as a key component to its plans to create a university-wide innovation ecosystem, and the square footage dedicated to startups founded by faculty and students has expanded. The university now boasts innovation hubs at its hospital campus in East Baltimore, and close to its Homewood campus in Remington. FastForward U Homewood, which is the most recent addition, supports student entrepreneurs through grant funding, and an in-house accelerator where they train, learn, and further develop their skills. The University of Maryland BioPark opened this space in Southwest Baltimore in late 2017, which provides short-term space for university-based entrepreneurs and companies to launch new commercial ventures. The GRID has moved to UMB’s Health Sciences and Human Services Library but still offers the same business development services to tenants and entrepreneurs from around the community, and it’s a place where University of Maryland, Baltimore graduate students can mix with entrepreneurs and access programs that help them advance new social and commercial ventures. Inside the GRID at University of Maryland BioPark. (Courtesy photo)

The GroundFloor at Harford

Havre de Grace is home to this coworking space that offers entrepreneurs and technologists in Harford County space to work and build community. Operated by the Harford County Office of Economic Development, it offers resources to grow businesses, as well, with access to mentors and programming onsite.

Nestled inside Columbus Center in the Institute of Marine and Environmental Technology, this incubator quickly became a home for green and biotech startups, as well as a place to learn about how business and science mix. Alongside a mix of office space, there are also wet labs at this life sciences startup-focused space. And don’t forget the harbor views.

Profiles Staffing Agency opened this space in the former Downtown Partnership of Baltimore offices in 2016. Members have access to the resources they provide, and the spaces on offer include a mix of private workstations and corporate offices.

Coworking in the geographic center of town brings together startups looking to create social change. Founded by Michelle Geiss, Pres Adams and Rodney Foxworth, the space inside the Centre Theatre has become a gathering point for social entrepreneurs, artists, nonprofits and policymakers. There’s coworking, 14 offices and ample community space. Over the past few years, it has keyed in on creating a community of its own. Cofounders Tony DiFatta and Michael Tich worked with plenty of entrepreneurs through their own businesses, and a monthly peer group called INSIGHT. In 2017, they opened a space to bring small business owners together every day. It mixes private offices and shared space.

Towson is one of six locations for this Maryland coworking network. It’s looking to bring coworking to the suburbs, and offer the kind of space that will help entrepreneurs get started.

Despite the Locust Point-based tech and marketing agency Mindgrub’s move to the metaverse, the coworking space remains. So does the Mindpub Cafe, which is inside the former home of Rachel New American Cuisine in Riverside. 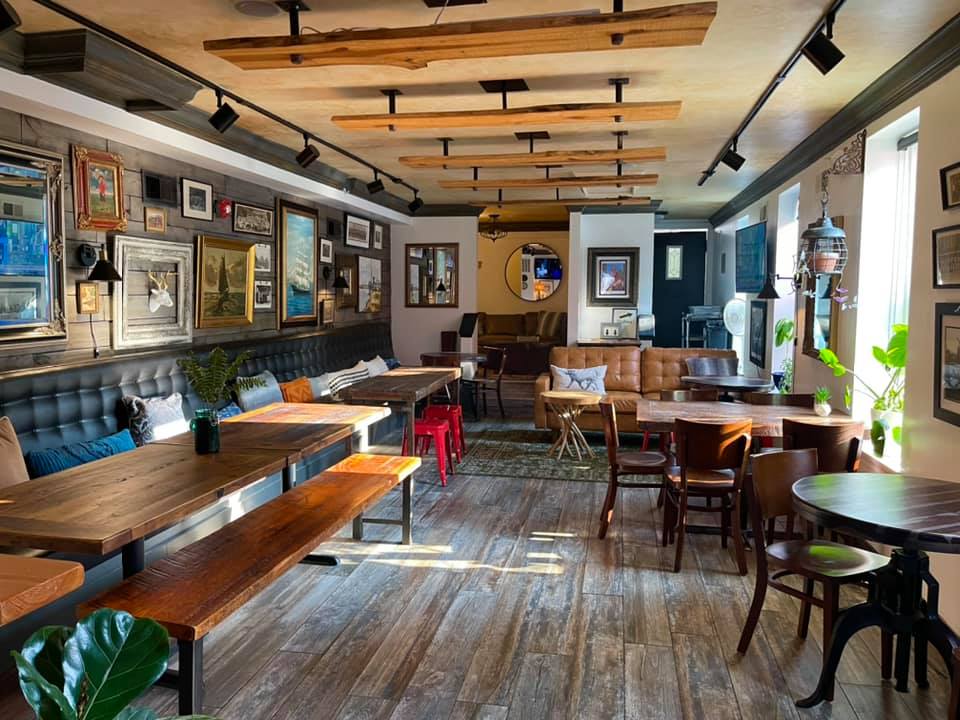 The massive makerspace boasts the tools that are helping hardware and light manufacturing startups get off the ground. But just as important to the team is the mission of giving back to the neighborhood around it, and through the pandemic it stayed true to that mission by 3D printing face shields and manufacturing desks for virtual schooling. Along with access to shop areas, Open Works serves as a community gathering point for the Greenmount West and Johnston Square community. In the end, it has a focus on helping residents launch businesses in the area. In 2019, the space reported an $8.5 million economic impact over three years and in 2021 reduced prices of the memberships. Located inside Catonsville’s historic Bank Building, one space serves as a gathering point for entrepreneurs in the commercial district in Catonsville. In Ellicott City, the space is located in a former fire station. A third location was launched inside Clarksville Commons in 2020, offering workspace inside a town center. Throughout, the owners pride themselves on offering coworking memberships without the burden of committing to a lease or contract.

In 2018, the opening of this shared office space inside Stadium Square marked a global coworking player’s arrival in Baltimore. It remains the only such company to enter the area and open up shop. Spaces puts a priority on private offices, but maintains the flexible leasing plans and configurations that’s become synonymous with coworking. It also has dedicated desks and plenty of common areas. It has a second Baltimore location at The Gallery at Harborplace.

Baltimore’s Cordish Companies made a move into coworking with this space at Power Plant Live! in 2015, officially opening at the top of 2016. It’s since expanded to every floor of the building, adding 12,000 square feet in 2019. The first floor space features a dedicated training room and green space for wellness and meditation, as well as workspaces. A floor up, digital services firm Fearless also expanded in 2019 and again in 2021, and now has a total of 27,800 square feet across Spark Baltimore. Home to a mix of tech, creative and service firms, Spark counts 149 member companies in 17 different industries. Amidst the pandemic the company has continued to adapt and expand to Kansas City and St. Louis, Missouri, with plans to open in Arlington, Texas later this year. StarTUp at the Armory

Home to Towson University’s StarTUp Accelerator, the 26,000-square-foot redeveloped former Maryland National Guard Armory in downtown Towson now dedicates 6,000 square feet to a coworking space. The facility is outfitted with tables sourced from fallen trees in the region, plus booths, couches, workstations, Wi-Fi and 347 power outlets. Opening its doors in 2021, at least seven companies have already benefited from the space while working through the accelerator.

The space in Federal Hill mixes the privacy needed for productivity and community connections. It has 20 private offices featuring lofts above desk space, while an atrium area forms a gathering space complete with coffee bar. The flexibility extends to the second floor of the building, which has a mix of apartments and workspaces. Other features include 24/7 access, conference room access and a golf simulator.

Donte Kirby is a 2020-2022 corps member for Report for America, an initiative of The Groundtruth Project that pairs young journalists with local newsrooms. This position is supported by the Robert W. Deutsch Foundation.
Companies: Spark Baltimore / FastForward
Series: What Local Means Now Month 2022
Subscribe