About STRATIS IoT View Open Positions
TOP ARTICLES
1
What does an economic downturn mean for your company?
2
With the help of machine learning, NoVa’s QCI wants to change how we think about quantum
3
Can you have an all IRL local team and remote employees? This founder thinks so

City Hall during the Hack for Change kickoff. Photo by Mark Headd.

The City of Philadelphia formed the Office of Workforce Development in 2018 as an effort to direct job training and growth programs into one specific space while also addressing transforming industries, a changing population and economic development.

Along with its inception last year, the City announced a workforce strategy called “Fueling Philadelphia’s Talent Engine,” a plan formed from a 40-member stakeholder committee with representatives from the education and workforce training sectors.

The plan’s goals included deploying about $13 million in workforce education and training by 2020. The plan also sets a two-year goal of 16,000 young people participating annually in high-quality work experiences, including summer jobs and year-round opportunities.

By the end of year one, in March 2019, youth that had participated in career pathway programs had gone up to 2,030 from 840 young people in 2017, according to the department’s comms director, Marjorie Llacuna Morris. High school students who were dually enrolled in college courses had reached 1,259, and young people engaged in quality work experiences was up to 12,695, Morris said.

Also in the year one report, the department said that $10.9 million of its $13 million goal toward workforce education training had already been invested in programs across the city like in job training organization Philadelphia Works and the Community College of Philadelphia.

“This total included the $2.5M from Governor [Tom] Wolf’s PAsmart initiative,” Morris wrote in an email. “And we’re currently tracking increased investments toward our Year Two report, for both youth and beyond youth.”

So how did the City go about making a plan for this workforce initiative? Morris said the City worked with the Economy League of Greater Philadelphia on an analysis on employment and wages for seven target industries, using 2016 data:

The report found those seven industries accounted for 71% of all jobs in Philadelphia, and that healthcare, retail and hospitality, and business and finance services sectors were leading industries, accounting for 80% of all jobs in the target industries. 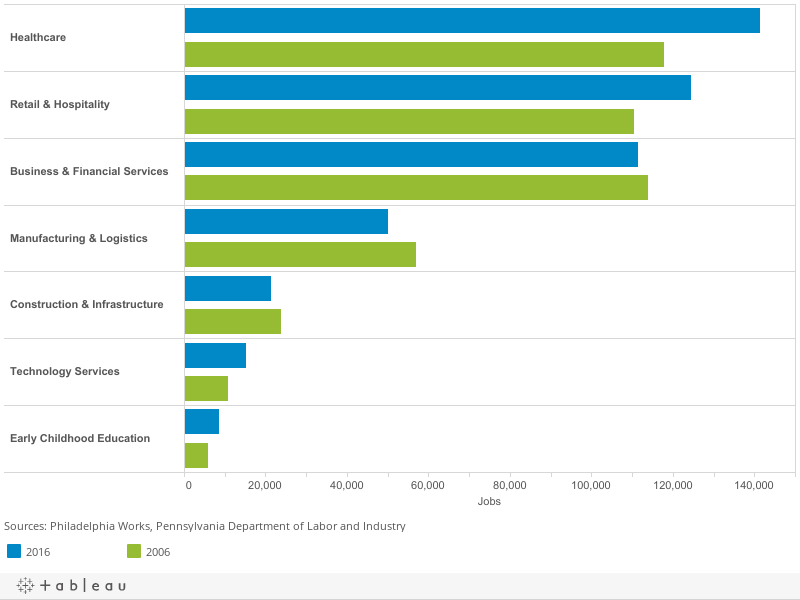 Following was the manufacturing and logistics industry with about 50,000 workers and average $73,000 yearly pay, then, construction and infrastructure represented about 21,000 jobs with an average pay of $88,000.

Of those industries, Philly’s tech workers were the “highest skilled,” meaning that 53% of the industry was made up of jobs that require a bachelor’s degree or higher.

And when it comes to industries that are projected to grow in the next few years, tech, early childhood education and retail and hospitality are “all expected to grow at a faster rate than overall employment growth in the city,” the report said.

What Roundtrip learned from two years of internal DEI audits

What does an economic downturn mean for your company?