The centerpiece of the Electrical Spectacle Light Show is a big kite at the center of Franklin Square’s fountain connected to a key.

Yes, that’s a reference to the story of Ben Franklin with his kite and key in a storm leading to the discovery of electricity. These features welcome visitors to the annual holiday display, which features about 200,000 LED bulbs.

The Electrical Spectacle opened two weeks ago for its 10th year and will run until Feb. 26 at Race and Sixth streets. I visited the park myself to chat with Technical Director Brian Sotack and learn about what goes into this wintery light show.

The process of setting up starts in the beginning of October with wrapping all of the park’s big trees and outlining its small buildings with string lights. Sotack said it takes about three to four days per tree, and there’s usually only a few people from Historic Philadelphia, the nonprofit that runs the park, working on it. 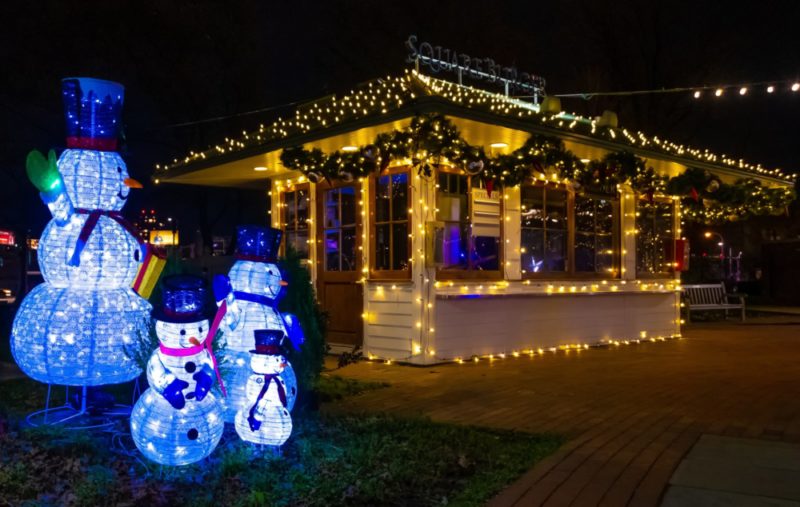 Lights line the small buildings around the park. (Photo by Jeff Fusco for Historic Philadelphia, Inc.)

In early November, an electrician group comes in and runs the backbone electrical power around the park that all the lights connect to. They also install the kite and the strands of light that run from poles around the fountain toward the kite.

The second week of November, PECO comes in and volunteers a crew of about 20 people to hang lights in the smaller trees along the walkways of the park, along with adding smaller details like garland along fences.

The setup each year is pretty much the same — except that Sotack and his team always aim to go bigger.

“Every year we kind of keep trying to add stuff that we can do on our own,” he said. “All the atmospheric lighting that’s on the tent, that’s all done by myself and John [Wilson] and some of our staff helping as well. The gobo patterns flashing on top of the roof or the gobo patterns inside, we see the snowflakes on the background, that’s all us as well.” PECO volunteers a crew to help set up the light show in November. (Courtesy photo)

The full setup takes about a month and a half, but Sotack comes every night to tweak small things and make sure that everything runs perfectly.

The show runs every half hour for the length of two holiday songs, with the lights around the park moving and changing to the music. The staff at Historic Philadelphia decide what songs they want to add or keep for the light show every year — “All I Want For Christmas Is You” is the latest addition — but Sotack said the songs have to be interesting enough in terms of rhythm or tempo, since the lights change to the music.

The show itself is programmed by an outside company called Parker 3D.

“It’s set for time so it’ll set and play every half hour on its own,” Sotack said. “Or we also have ‘trigger cards’ [memory cards] where we’re able to just trigger a specific show at a specific time if you have a special event or we need to start at a different time for some reason.”

The Electrical Spectacle at Franklin Square kicked off the holiday season with its annual light show pic.twitter.com/snow2DaFyI

The director said this show is the most technically intricate event Franklin Square pulls off in a given year, with its lantern festival in the fall coming in second place.

His personal favorite part of the display is when the lights on the big trees “chase,” meaning they turn on and off up and down the tree: “It’s a lot of work to put all those lights up, and so to see them functioning as designed, I think is really spectacular.”

The setup of the Electrical Spectacle at Franklin Square starts with lights being wrapped around the biggest trees in the park pic.twitter.com/oZkF7Tp4sj

Overall, Sotack said he wants visitors to just enjoy the lights and the familiar music.

Sarah Huffman is a 2022-2023 corps member for Report for America, an initiative of The Groundtruth Project that pairs young journalists with local newsrooms. This position is supported by the Lenfest Institute for Journalism.
Series: The Tech Behind
Subscribe