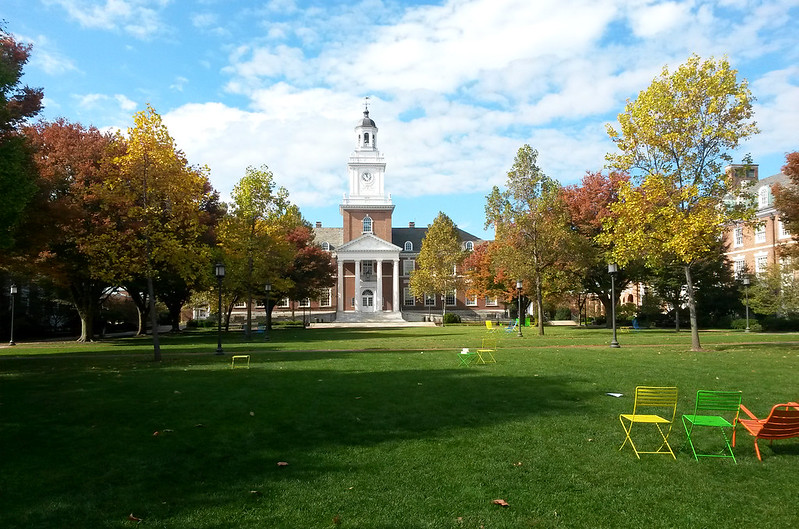 On campus at John Hopkins University.

In city governments around the country, including Baltimore, innovation teams have sprung up to apply creative and cross-agency approaches to tackle daunting challenges.

A new center at Baltimore’s Johns Hopkins University will seek to bolster innovation within city governments around the country.

The Bloomberg Center for Public Innovation is set to serve as a hub for city leaders and teams to receive training on taking creative approaches to problem solving in local government. It will also conduct research on these efforts. The center is funded through a $43 million investment from Bloomberg Philanthropies.

This will result in fellowships and peer-learning opportunities for City Hall staffers around the country, which are designed to help strengthen the networks of folks focused on public innovation. It will also create three new Bloomberg Distinguished Professors that will focus on urban policy and civic innovation.

“City leaders have unique powers to save and improve lives, and this new center will help them do more of both, by advancing the art and science of innovative local government,” said Michael R. Bloomberg, the Hopkins alum and prominent businessman who served as mayor of New York City, in a statement. “The center will be the first of its kind in the world, and it will help meet the enormous demand we have heard from mayors and their staffs for bold and creative new ways to tackle their most pressing challenges.”

Serving as executive director will be Amanda Daflos. She served as the first innovation officer in Los Angeles, and established the i-team in the California city.

“Amanda’s pioneering work as an executive in one of America’s largest cities and as a national grassroots leader has helped advance government innovation across the globe,” said Beth Blauer, associate vice provost of data and innovation at Johns Hopkins University. “From leading public health and data initiatives during one of history’s most challenging moments to championing gender equity and affordable housing progress, she demonstrates the kind of leadership and forward thought that will pave the way for continued investment in data and evidence-based innovation.”

The center will also be the home for public innovation-focused Bloomberg Philanthropies programs, including Bloomberg Cities Network, Innovation Teams and the Cities of Service initiative.

Hopkins is also home to the Centers for Civic Impact, which was spearheaded by Blauer to help cities harness data through coaching, training and research.