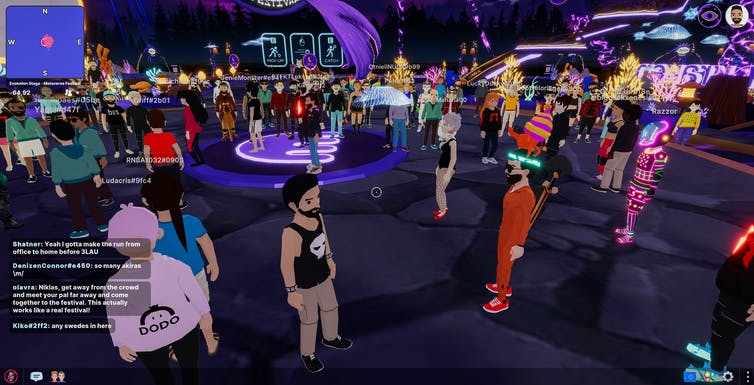 Despite what you may have heard, the metaverse is still the future — at least according to metaverse entrepreneurs, Forbes and the stock market.

Meta investors may not have faith in the immersive digital worlds, but independent VR world builders continue to quietly evolve, their visions intact.

ESPAT TV is a creative collective that combines branding, esports, movie theaters and “next gen” metaverse content. CEO Dante Simpson was a special guest at Wilmington-based Futures First Gaming’s (FFG) 2022 Fall Brawl event in October. He chatted with two of FFG’s cofounders, Stephen Sye and Malcolm Coley, about his journey from accounting student at Ohio State to branding pro with Gucci and Sony/BMG to CEO of the future.

Branding, Simpson said, drives industry in the digital era, whether it’s fashion or esports. It was the base of the first business he cofounded, years before ESPAT TV.

“We were firm believers that brands and outside money was going to be the future of driving esports,” he said. Think: Household-name companies buying digital space or selling digital wares. “A lot of people thought that we were crazy back then, but you see what’s happening right now, and that stuff is coming to fruition. Back in those days, it wasn’t a thing. But part of understanding and having vision is being able to see those tidal waves before they happen.”

That kind of vision is necessary for entrepreneurs working in the metaverse, which is either looking like a pile of wasted money or a well of potential, depending on your mindset. Leaders in the space like Simpson continue to see its potential.

Those key performance indicators include how long a user is on, how interactive they are while they’re there and whether they’re making purchases within the space.

“Brands now are trying to find new ways to connect and listen to their audience,” Simpson said. “And the metaverse is just an immersive experience for doing so.”

Think of Grand Theft Auto, for example, and the ad integration it has in its Times Square cityscapes. Those ads worked because the game had a totally engaged, immersed audience, he said: “That is going to be the success in the future of the metaverse — understanding where you can overlap it in ways that matter to folks.”

Highly interactive games like Fortnite are essentially their own metaverses without the metaverse. When the actual metaverse looks like Fortnite — and that is coming, Simpson insists — it will be huge for branding professionals. Especially if they have the foresight to get in on it early.

“Our goal is to become the architects of the metaverse,” Simpson said. “That’s our objective. You and I both know as gamers that a lot of what we’re seeing in the metaverse is like 16 bit, 32 bit. It’s old-school stuff. What happens when you turn on your meta and it looks absolutely real and authentic. That’s what we’re doing. We want to be synonymous with that in the metaverse the same way that Disney recognized that Pixar was synonymous with animation.”

If branding, esports or the metaverse are your thing, watch the full discussion: