Power Moves is a column where we chart the comings and goings of talent across the region. Got a new hire, new gig or promotion? Email us at pittsburgh@technical.ly.

Though Technical.ly only launched its full-time coverage of Pittsburgh in June, we’ve seen a massive number of leadership changes across the tech industry here — but some from this year stood out more than others. As we head into the new year, we’ll be looking to these new leaders as a signal of what the future of Pittsburgh tech might look like, and how we can build on the success of the companies already growing here.

Here are the hires, promotions and career changes that stood out to us most in Pittsburgh this year:

Leslie Davis took over as UPMC’s new President and CEO.

Local healthcare giant UPMC announced that Jeffrey Romoff would be succeeded by Leslie Davis as president and CEO of the nonprofit after leading the organization since 1992. Previously, Davis served as the president of UPMC’s Health Services Division. 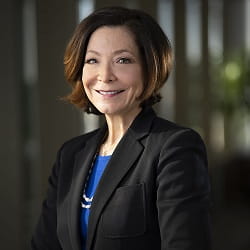 The new leadership of UPMC, an international network of 40 hospitals that also has ties to the University of Pittsburgh School of Medicine, signals a new era for healthcare innovation in Pittsburgh. As technologists and entrepreneurs alike have pointed to the life sciences as potential new frontier for economic success in the next decade, the expertise from an institution as connected and well-resourced as UPMC will be key to ensuring that happens.

“I look forward to continuing to ensure that health care is accessible and affordable to our communities while driving innovation, employee engagement, academic excellence and research across all of our hospitals and practices,” Davis said in a July release for the news. “I am confident in our organization’s future and look forward to continuing to serve our patients, our members, our employees and our communities as UPMC soars to even greater heights in the future.”

At the top of this year, life sciences innovation hub and incubator LifeX Labs announced Max Fedor as the organization’s new director. Prior to taking on the new position, Fedor was the president and CEO of BIOSAFE Inc. as well as a VP of development and operations for Tissue Informatics.

The news of Fedor’s appointment came shortly after LifeX announced its new president and CEO as Gerald Vardzel. He took the reins from interim CEO Evan Facher, joining LifeX after being the president and director at Predictive Oncology, which uses artificial intelligence as a tool in oncology treatments and tumor modeling.

“We have the opportunity to build a novel and innovative platform to not only be a major contributor to the growth of the life sciences regional ecosystem, but to be recognized as a premier life sciences incubator across the country,” said Vardzel in a statement to the Pittsburgh Business Times last January. Our region has the infrastructure and resources to have a meaningful impact in the near term, but we must leverage our existing strategic relationships while building new ones outside our region.”

At CMU, a new CIO and a new robotics director.

2021 was a big year for Carnegie Mellon University, which saw a slew of announcements on funding, innovation and community collaborations. Helping to lead this new era for the university are two key new appointments in executive positions on the school’s tech divisions.

In January, the university announced Stan Waddell as the new CIO and VP for information technology, after serving as an associate VP for computing services since 2019. A press release said that much of Waddell’s role would involve developing a strategy for technology and data management, as well as improving the IT infrastructure of the school as needed. “CMU is extremely well-positioned to embrace data-driven and technology-enhanced approaches across its missions, and I look forward to working with the campus to make the most of these opportunities,” he said. (Notably, Waddell is also on the board of internet accessibility startup Meta Mesh Wireless Communications.)

This November, CMU also announced new leadership for its Robotics Institute. A university alum, Matthew Johnson-Roberson, will take over as the institute’s director starting in January 2022. Given Johnson-Roberson’s expertise in autonomous vehicles as codirector of the University of Michigan’s Ford Center for Autonomous Vehicles and former team member for CMU in the 2004 and 2005 DARPA Grand Challenges, the hire is a strategic move for the university as it continues to be a supportive innovator and talent mill for local companies in that industry.

To close out a successful year for the company after several key announcements, including a finalized acquisition of Uber’s Advanced Technologies Group and a SPAC deal that took the company public, Aurora Innovation shared that it would expand its finance team, with former VP of Finance Richard Tame hired as the company’s first CFO.

In his former role, Tame helped lead the company through the SPAC deal with Reinvent Technology Partners Y, which will open the door to future funding to help advance the company’s mission of being the first commercially available autonomous vehicle company. Prior to the finalization of that deal, Tame also spearheaded financial maneuvers for many new key industry partnerships that position Aurora as a leader for AVs.

IAM Robotics announced a new CEO as its founder moved to CTO. In May, IAM Robotics — a mobile robot developer for material handling solutions — announced that Lance VandenBrook would be the company’s new CEO. VandenBrook’s hire comes as IAM’s founder and former CEO Tom Galluzzo moved into a CTO role to refocus engineering and technical needs for the company.

“IAM Robotics has built a solid foundation and is poised for growth,” VandenBrook said in a press release. “I am excited to be joining the company during this time and I look forward to what our future holds.”

Autonomous cleaning robotics startup Thoro.ai announced Patrick Mondi as the company’s CEO. Launched in early 2020, Thoro.ai is the result of a partnership between Carnegie Robotics (which is itself a CMU spinoff) and Nilfisk, a cleaning equipment company. Prior to taking on the top position at Thoro, Mondi cut his teeth in autonomous robotics at Uber’s Advanced Technologies Group, which was acquired by Aurora at the end of last year. Most recently, he was global head of supply chain, logistics and workplace at transportation company Lime.

“Our mission is to create reliable, cost-effective, industrial-grade robotic solutions that enable the equipment to function as an extension of the cleaning workforce,” said Carnegie Robotics CEO John Bares in a statement upon Thoro.ai’s formation in September 2020. “Thoro technology is about being ‘thorough’ — using robotics and artificial intelligence to ensure a new standard of clean in public spaces.” Shortly after alternative energy-powered bitcoin mining firm Stronghold Digital Mining launched its IPO in November, the company announced that RustBuilt Pittsburgh refounder and head of network Kit Mueller would join the company as its new VP of corporate development. It still remains unclear what Mueller’s move will mean for the RustBuilt Pittsburgh community, where he’s helped connect entrepreneurs and technologists with the resources they need to grow companies here. But Mueller did advertise a job posting for a community manager at RustBuilt last month on LinkedIn.

Regarding his new role however, Mueller shared on social media that he was “very excited to announce that I’ve joined the Stronghold Digital Mining team, and will be growing our Pittsburgh office, and helping increase the positive impact we’re making across the country.” Mueller also added that the company is actively hiring for multiple roles across engineering, finance and operations.

After one of the most successful IPOs in recent history, Duolingo has continued to expand its operations, with new product features, a growing social media presence, local office expansion and of course, new hires. One of those hires — Kendra Ross as head of social impact — is a first for the company, though Duolingo has long advertised itself as being mission-driven. When Technical.ly spoke to Ross (who has a background in consulting, nonprofit work and nearly two decades of experience in the music business), she shared new community-focused goals for the company in an effort to give back to the Pittsburgh neighborhoods that have helped it grow. Beyond Duolingo specifically, the hire signals a growing number of technologists who are interested in working for companies with social missions that align with their own values.

“Pittsburgh has been a key part of Duolingo’s success, and we want that to translate back into success for our local community,” said Luis von Ahn, cofounder and CEO of Duolingo, in a statement. “By creating this role and hiring Kendra to lead our social impact efforts, it allows us to better plan and operationalize our efforts with greater intention and scalability.”