Vistar Media's tech stack is not for the faint-of-heart - Technical.ly Philly
Fresh jobs served straight to your inbox

Vistar Media is a Technically Talent client and reviewed this article before publication.

The snack shelf is stocked at Vistar Media and so is the technology stack.

Vistar prides itself on experimenting with the bleeding edge.

When Vistar devs aren’t in the midst of code reviews and one-week sprints, engineers will set up shop for late-night board game tournaments, tech community meet-and-greets and spike project tinkering.

“Definitely come to our open houses,” Romanowski said, while mentioning Vistar also sponsors local meetups. “When we meet people there who impress us, we keep them on our radar for potential hires.”

Technical.ly Talent sat down with Romanowski to chat about Vistar’s company culture, its work with new tools like Bazel and why everyone loves end-of-week presentations.

What about the company culture strikes you?

It’s very open. We have core teams and project-based teams, so people aren’t placed on a team and forced to stay there forever. It affords the opportunity to learn a lot of different technologies.

I also really like the thorough code review process. Not every tech company takes testing and peer review seriously. No code here makes it to production without going through at least two engineers.

If engineers are getting stuck anywhere, they’re encouraged to get into a conference room and figure out the problem. I don’t know if perfect code exists, but we submit code that’s as close to perfect as possible. Always.

One of the tools we’ve been learning is Bazel, a fast build system written by Google. Google has an internal version, and they’ve begun to open source it. We’re building most of our software through Bazel, and we use it for testing, as well. To my knowledge, it’s not yet used widely by many companies.

It’s cool working with tech that isn’t yet widespread. For example, we also have an app where the client-side code is TypeScript. Some software companies wait for new technologies to battle-harden before using them.

At the same time, we still use frameworks like Flask, which has been around a while, and we still have code written in Java and Python as well.

Mondays are actually pretty great here. One of the engineers will bring in bagels for everyone, and we review the past week, while setting goals for the new week.

We all have lunch together twice a week in one of our kitchens, and on Fridays we’ll end the work day early to present what we’ve been working on to the team. It’s a little happy hour for everyone to show off what they’ve been working on — everyone looks forward to it.

Do engineers get the chance to work on side projects?

We work on spike projects that don’t have to be a product for the company. It could be a tool that will have some use to the team in the future.

We’ve had a wide variety — one week we had two people write a Chrome extension to help people when reviewing code to correlate test cases to the code itself. We even had one pair use Amazon’s computer vision service, Rekognition, to detect when lunch arrives and alert the team.

It gives us time to work with tools you wouldn’t expect, and sometimes they do end up making it into our work-related projects.

How does your role at Vistar complement your personality?

I find myself trying new activities outside of work every week. I’ll try a new brewery or do touristy visits to Dilworth Park and Penn’s Landing with my friends. This past summer me and my brother decided to go jet-skiing, and I spent a lot of my summer going to different beaches. But at the same time, I’m your typical nerd, playing video games and binging Stranger Things, or rewatching The Office for the millionth time.

At work I get to try new things all the time. Being able to work on short-lived project-based teams from time to time offers nice variety in my professional life. For example, right now I’m on a team working with one of our designers in New York to recreate some of our internal tools. I’ll be working on newly designed components in the product itself.

What kinds of social events does Vistar host?

Vistar sponsors local tech meetups, like Software as Craft. One night recently everyone just got together, took a piece of good code, and threw back some drinks while trying to write the worst code they could manage. Other meetups are more like workshops or talks, and it’s actually a great way for us to meet people we might recommend apply for a role at Vistar. 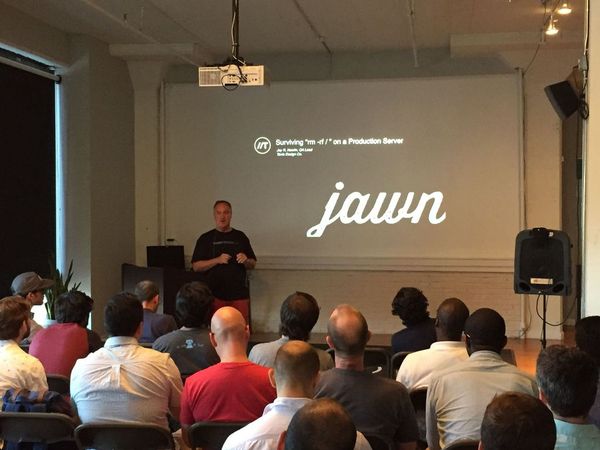 We are a group of software professionals dedicated to improving our craft, learning, teaching, and growing the development community in Philadelphia. We meet regularly to disc…

Every couple months or so we’ll do a board game night which is really fun. We’ll order food and play a couple games. Lately we’ve been playing Resistance, and everyone always thinks I’m the spy. We’ll all end up staying really late at the office just playing and ordering food.

What advice do you have for prospective new hires at Vistar?

Definitely come to our open houses. When we meet people there who impress us, we keep them on our radar for potential hires and usually suggest them our recruiter Diane Worthington or give them her business card. It’s a good way to show that you’re interested to learn more about the work we do, since it does take time in your day to go to these events, especially when you’re going after a long work day.

For a new employee, because I’m in the interview process sometimes, one of the things I really like to see from a candidate is someone who has done their research and knows the company.

Obviously, we’re also looking for someone who’s open to trying out new tools and new tech, because you may be placed in a team where you’re using the tools you’re not familiar with. We don’t want someone showing up uninterested and not really have a clue what they’re interviewing for. It’s a good quality to come with questions, as opposed to just showing up and asking about code and vague computer science questions or something.

The interview process usually starts with you meeting with one of the engineers either in person or over a phone call, kind of a pre-interview interview. After that you’re given a code puzzle to work on that gets submitted to the team for review, and once that’s done you’ll come in and do some whiteboarding and we get to know you some more.

There’s room for growth at Deacom

At URBN, technologists are working at the intersection of fashion and engineering

How the history of Linode HQ inspires its employees