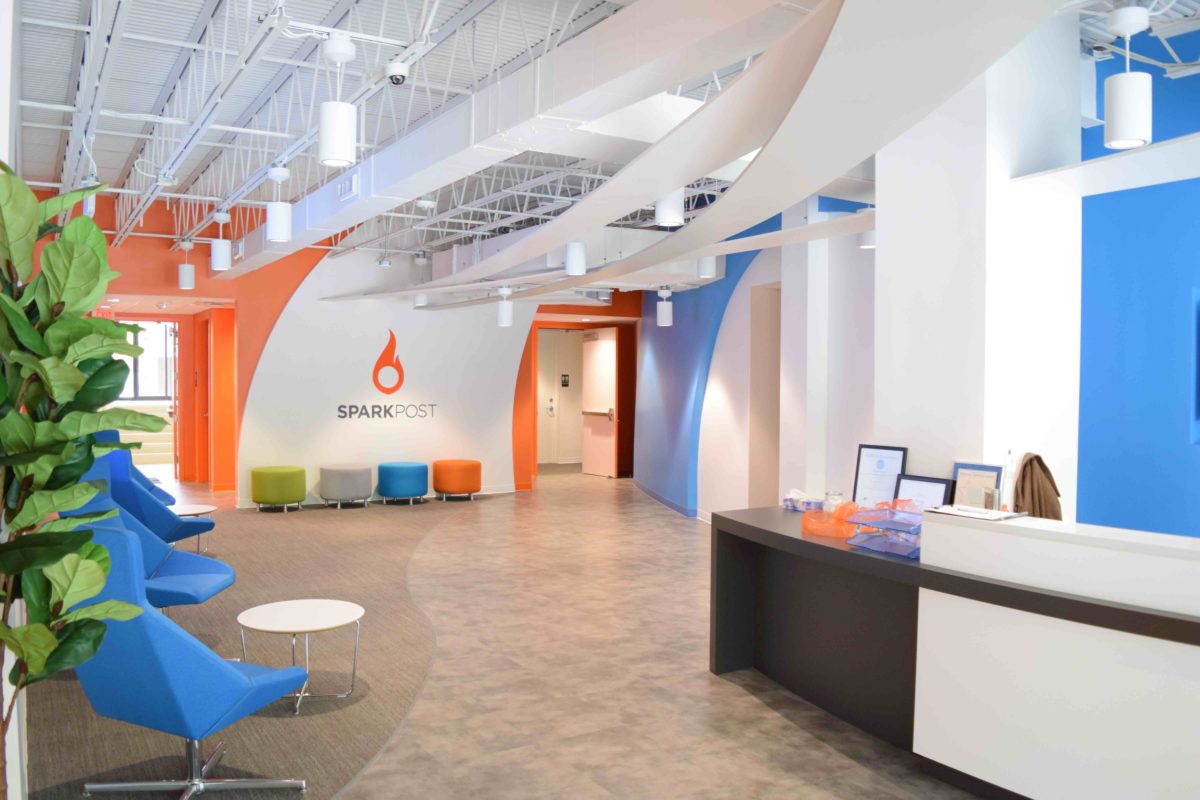 The lobby of SparkPost's office in Columbia. This article is one in a series on Columbia, Md.

Editor’s note: Technical.ly’s realLIST is a well-informed accounting of the top tech firms in the markets we serve.

Tenable’s recent initial public offering brought a lot of attention — and dollars — to the Columbia area. But it’s not as though the Howard County began when the opening bell of the NASDAQ rang on July 26, 2018.

For one, the company itself is 16 years old. And it’s part of a broader community of startups, fed by talent from universities and government brain centers like the National Security Agency and Johns Hopkins Applied Physics Lab, and buoyed by an East Coast location with equal proximity to D.C. and Baltimore.
For its part, the Columbia area has a rich startup history that’s brought big players to the area. In 2013, Cisco bought network security firm Sourcefire for $2.7 billion. Oracle entered the area the next year with a $5.3 billion deal to buy point-of-sale pioneer and “39-year overnight success” Micros Systems. When it comes to helping entrepreneurs, the area has the Howard County–backed Maryland Center for Entrepreneurship and state-created TEDCO, which have long provided funding and resources. More recently, the cyber-focused startup studio DataTribe brought Silicon Valley business chops to Maple Lawn, and the area gained a chapter of Startup Grind.
Each of these exists proved to help the early stage companies in the area. So that got us thinking about which startups might be next to get big. And that led to the inevitable question often heard around the Technical.ly Slack channel: Who’s real?
Determining the answer requires considering a number of factors. For one, we’re looking for a bold idea. The founders themselves are also important. Plenty of investors we’ve talked to identify “team” as one of the key factors in choosing where to invest (often more so than the “idea” of the company itself). There are also factors like customers and revenue, investment capital, team size, potential impact and office space.
The result is a midsummer, mid-Maryland edition of our popular realLIST series. (Here’s the 2018 edition for the Baltimore area writ large. Here’s the D.C. version.) It’s a roundup of the top companies that are showing promise. In other editions, we’ve focused only on young startups. But given the IPO excitement and that some of the more entrenched companies might not be as well known outside Howard County, we decided to drop the age limit that has guided earlier lists.
Become a member to receive an additional list of 10 up-and-coming Columbia firms
It can be a bit daunting to consider, so we used a few criteria to narrow the list down. To be considered for the realLIST, companies had to:

(One important caveat about this list: Not making this list does not mean we deem a startup “unreal.” This is simply a snapshot of what we’re most excited about right now.)
And so, without further ado, here’s Technical.ly’s realLIST for Columbia and Howard County.

Rather than being technologists looking for an industry with opportunity, husband-and-wife team Saureen and Somil Desai saw the potential for change from the inside the logistics sector. With a platform to get shipping quotes and an app to make inspections easier, the company sees lots of chances to bring change to a true legacy field. There’s more to prove, but we’ll also give a nod to Somil’s transparency in reporting the company’s monthly recurring revenue.

In Maryland, we see plenty of health-IT startups that grow out of the area’s medical institutions. With VitusVet, Mark Olcott and Kalpesh Raval are bringing health record innovation to the veterinary field. The ability to access and share medical information has proven to be a big opportunity in the human healthcare space. Early traction indicates an opportunity with vets, too.

The first of a number of cybersecurity startups on the list, Dragos is one of a number of companies talking about threats to the critical infrastructure and industrial control systems that help society function. It’s a problem that’s only become more talked about since the startup first popped on our radar as initial members of DataTribe in 2017. Cofounders Robert M. Lee, Jon Lavender and Justin Cavinee have experience inside the intelligence community finding rogue malware, and the company is still finding new examples (like this one that caused power outages in Ukraine). After raising $10 million and moving into its own office, it’s already an exhibit of the talent that leads companies to start — and stay — in the Columbia area.

Another DataTribe company that’s already grabbed the national stage, founder Ellison Anne Williams paved the way at the NSA with a new form of encryption that keeps data secure while it’s in use — then showed it was possible to commercialize technology from the outpost known as “No Such Agency.” The company is showing plenty of promise, making an early splash at the RSA conference’s much-watched Innovation Sandbox competition, and attracting investment that showed interest from the CIA’s venture arm as well as Thomson Reuters. The fact that it’s truly next-level technology makes us wonder what else is sitting behind the wall?

The Columbia company helping making things easier for third-party merchants to sell across ecommerce sites is one of a group that’s now helping Amazon navigate the area. Cofounders Daniel Sugarman and Daniel Sperling-Horowitz went through Silicon Valley accelerator Y Combinator and set out to build an ecommerce business. But the point that changed the trajectory came from listening to customers, when Jet devs told them their software was the thing that posed real opportunity.

When looking at key ingredients for startup growth in the health space, Baltimore-born WellDoc seems to check the boxes. It created technology to take care out of the clinic with its management app, and found a use case with diabetes. It also has FDA approval, a coveted point of validation and a must since it has to be prescribed. Partnerships with household names like Samsung and Johnson & Johnson show there’s interest from consumer giants. After raising a $29.5 million Series B, the company looked to put the infrastructure in place to scale.

One of the companies to be formed by former leaders of Advertising.com, the company provides the data management platform that helps businesses and marketers reach consumers via tech. The company has looked to move into TV, and CEO Andy Monfried told CNBC this year that the company is valued in the “hundreds of millions” of dollars. That elevated position has also put it on the front lines of GDPR and the battle against bots.

Most of the area’s cybersecurity startups deal in protecting software from attacks that make their way through your email. So when a company comes along that’s working to protect drones, one’s ears tend to perk up. Attention is fully rapt upon learning that its software product (called MESMER) can actually take over the controls of a UAV that’s gone rogue. The thought-provoking technology has helped earn the company plenty of national press. With a recent partnership with defense giants Raytheon and Booz Allen Hamilton, the company is showing that it can attract interest beyond TV hits.

When tech giants like LinkedIn, Twitter and Zillow send an email to a customer, it’s actually the work of this Columbia company. While Gmail handles person-to-person email, SparkPost handles the messages that come from an application. With a move to a new office and a new CEO with a history of exits, the company appears to be setting up toward a big growth move. Watch out.

Another company that’s a lesser-known provider of tech tools for big players, the Fulton-based “DevSecOps” automation company is a leader in open source. It combines tools to help devs identify the best open source tools to build software, and potential security vulnerabilities in code. Its most recent $30 million funding round came with backing from Goldman Sachs. With former Sourcefire CEO Wayne Jackson leading the company, a notable exit wouldn’t be surprising.

A national leader in virtual reality can be found right over in one of those office buildings off Columbia Gateway Drive. Born out of research at Johns Hopkins, it’s among the oldest companies on our list. It’s not here for seniority alone, however. The company has evolved, first making VR goggles and head-mounted displays, then more recently leading in software as a cofounder of open source VR. While the company has plenty of uses across industry, education and defense, it’s also looking to participate in taking virtual reality mainstream.

Want the scoop on more Columbia tech companies to put on your radar?

Show your support for on-the-ground reporting by joining our membership program and we’ll send you an additional list of 10 up-and-coming tech firms.
Become a Member
Technical.ly membership helps you seize new opportunities in the places you care about most. Join today.