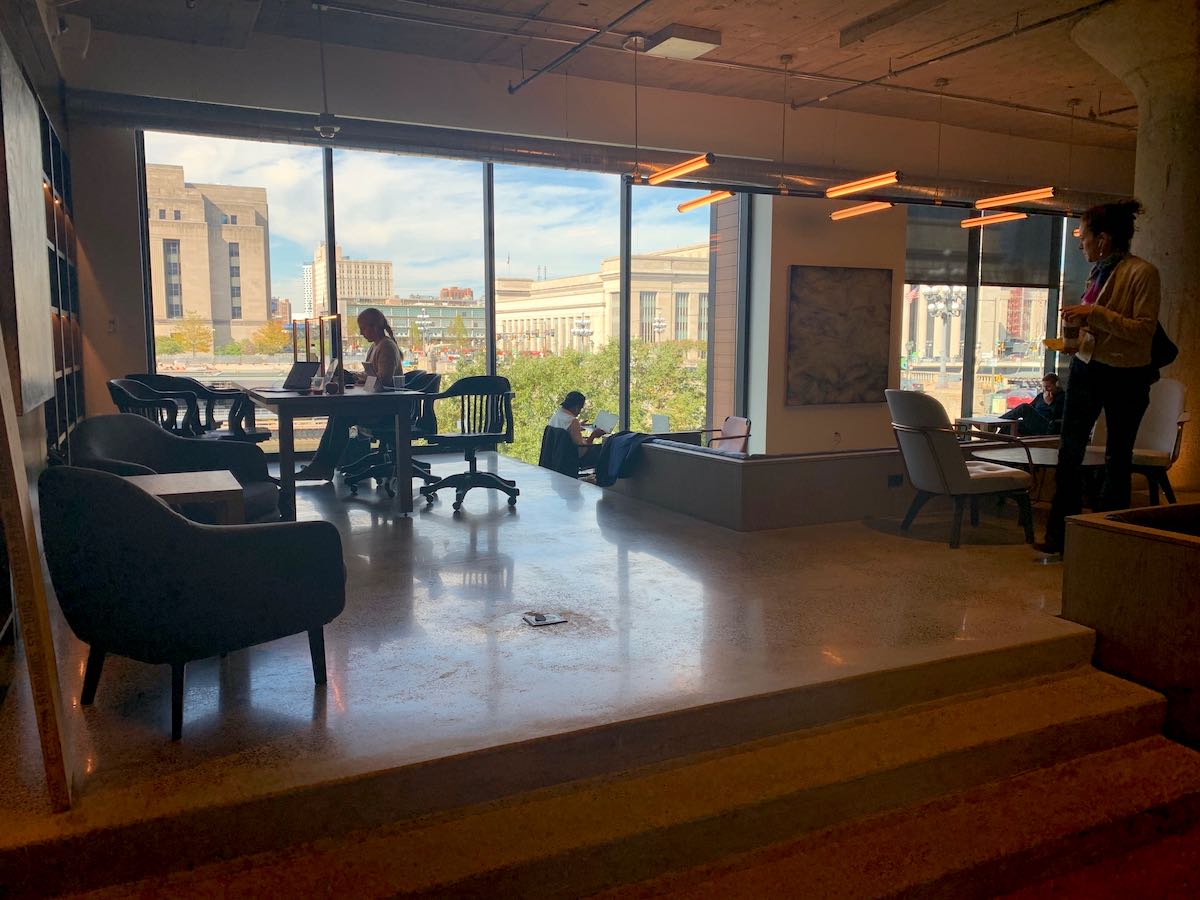 Through an unsuspecting purple door off 24th street between Market and Chestnut streets, members can enter the lobby of the elite Fitler Club, a lifestyle, business and social club.

And through a connecting door (or, if you’re a guest, through the expansive lobby of 2400 Market St. and up an elevator) you can enter Offsite, the city’s newest coworking space with a capacity of about 200 members — and a wait list.

Silvana Carpinito, Offsite’s sales and community manager, showed Technical.ly around the space on a Tuesday morning, explaining that the concept started with one room called “The Study” that Fitler Club members could use to get business done if they were at the club.

When the Fitler Club (aka “the Union League of new Philadelphia“) officially opened in March, The Study was so popular that a full 34,000 square feet of coworking and office space was developed and opened last month, on Sept. 16.

The style of the Fitler Club — dark woods, rich metals, luxury furniture — carries over to the workspace, where there’s a mix of open seating, private offices and “anchor companies,” who rent larger offices. (Mostly remote Wildbit just moved a few folks in.) The space also holds 32 designated desks for individuals who want their own place to set up shop, and a few large rooms that can be set up for events or speaker series.

Offsite also offers members 24/7 access to the space, which includes boardrooms, conference rooms and phone booths for added privacy, and a communal kitchen with La Colombe iced lattes on draft.

Offsite and the Fitler Club share some common space, but a few signs throughout the space specify that only Offsite members are allowed past specific points.

“About 92% of Offsite members are also Fitler Club members,” Carpinito said. Most come and go through both spaces often.

The two clubs, which total take up more than 60,000 square feet of 2400 Market, were designed to be able to mix lifestyle with business and make networking and connecting more seamless, she added. “Essentially, you could have board members come and stay [in one of Fitler Club’s 14 hotel rooms], get in a workout, go do some work, have a business lunch, and be able to have a productive day and network in a way that’s organized to be natural and efficient,” Carpinito said.

Now, about a month after Offisite opened, it only has about three remaining office spaces available (monthly fees for private offices start at $1,500/month), and there’s a waitlist for a membership for a designated desk (which costs $350/month).