Less than a week ago, Second Chances Farm founder Ajit George was preparing for the indoor vertical farm’s first harvest, 90% of which was going to local restaurants.

Then, the COVID-19 State of Emergency hit Delaware, leading restaurants and bars to end on-site dining.

“Literally every [restaurant] cancelled, because no one knew what was next,” George told Technical.ly. “I’ve been through a lot of stuff in my lifetime and I thought I was seasoned enough to go through any crises, but I never thought I would ever live [to see a day] where every restaurant in the state of Delaware and Philadelphia would be closed.”

“But what we were lucky enough to find was that, starting last Thursday, people called and asked if there was any way we could deliver food to their house,” he said.

It makes sense, during a time when people are isolating themselves at home and practicing social distancing, that cutting out the middle man — the now-often-swamped supermarkets — is an appealing idea. The lettuce, arugula, kale, bok choy and variety of herbs is grown in a highly sterilized environment with strict food safety measures.

“[Our safety measures are] nothing new, but we have absolutely heightened the focus on food safety,” he said. “I don’t walk into the farm … unless I’m completely suited up.

“I’m getting a lot of positive feedback,” George said. “People are shocked at how different food tastes when you don’t have any chemicals in it. We actually put some recipes together so people can try cooking things they’ve never cooked before.” 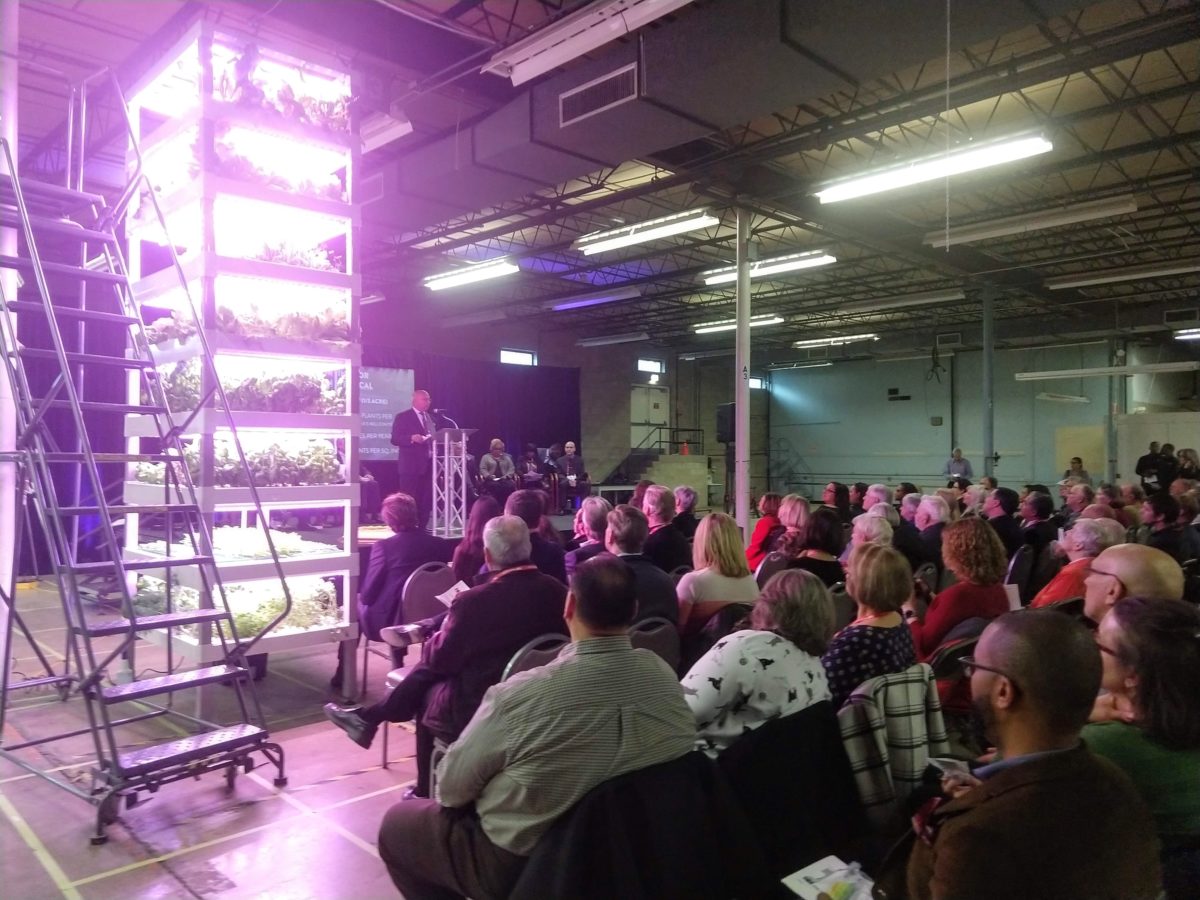 Ajit George speaks next to one of the hydroponic towers meant for the Second Chances Farm warehouse space in Riverside, November 2019. (Photo by Holly Quinn)

As we chatted by phone, he sent a sample package to this reporter’s house, with basil, dill, cilantro, kale and a couple of different salad greens. I later made a quick salad out of spicy red and green leaves that were, in fact, incredibly flavorful (so much so that I’d recommend mixing them with one of the milder salad greens to taste if you’re not into bold flavor in your salad greens).

“It never occurred to me that I would be in the home delivery business,” George said. “But more people are reaching out by the minute. We were able to mobilize that and we’re delivering.”

He said he’d lost count of the number of at-home clients that had signed up, but he guessed it was around 100 the first day, all in the aforementioned counties.

The goal is to have 250 households signed up by next week, paying a monthly fee of $99.95 for four weeks. The pricing, which works out to a little under $25 a week, is competitive with buying fresh produce at the grocery store; with an average of six items, the cost is about $3.99 per item for just-harvested farm-to-table.

The other 10% of the harvest had been committed to EastSide Charter School, located across from Second Chances Farms’ Riverside location. The farm is continuing to provide produce to the school, only now it’s being provided directly to families. As EastSide is being cleaned and sterilized, parents pick up their children’s schoolwork in the farm warehouse lobby, where they also pick up a bag of fresh food.

As for the employees, “everybody is full-time busy,” he said. “We can keep everybody busy for the foreseeable future and not leave anybody out. We’re not only doing a service to the community, but we’re also keeping our returning citizens fully occupied and paid. For them, they would be in deep trouble if they got laid off because the opportunity to get paid by anyone else would be very low.”

That, he says, is a where the farm’s main social impact lies: “Our goal is to reduce recidivism with full-time jobs.”

In addition to ordering your own farm-to-table packages, members of the community can also sponsor a CSA package for other community members.