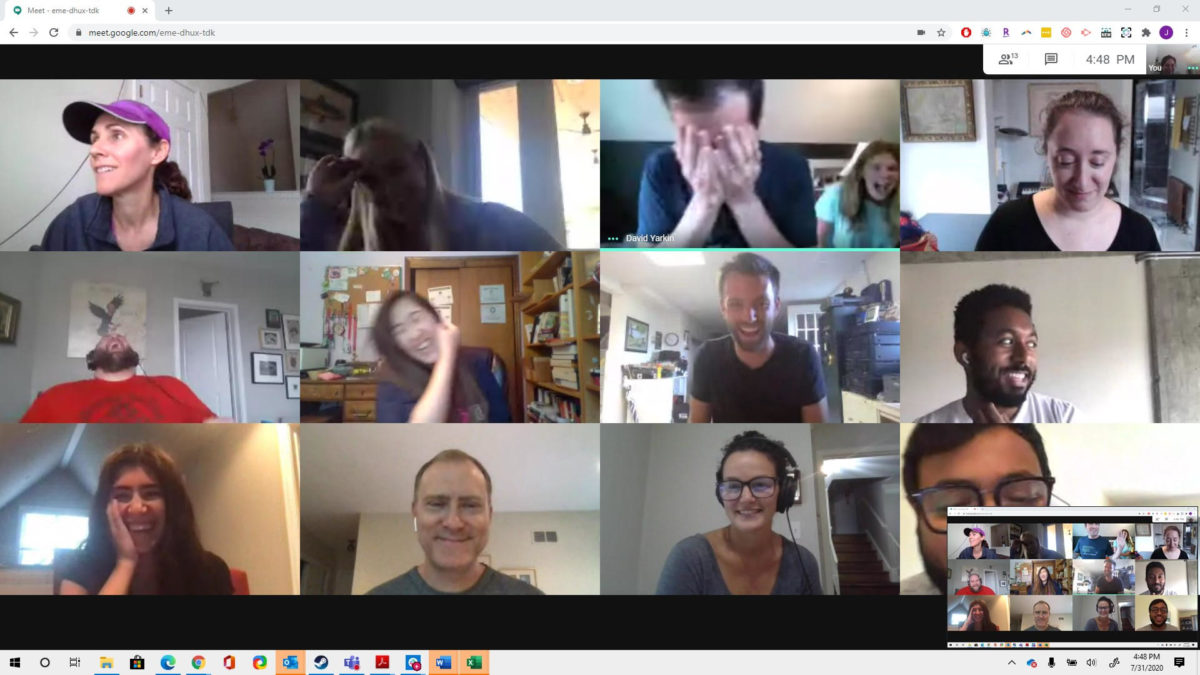 Procurated's team enjoying one of its Friday Olympics happy hour.

None of these promising startups could predict a pandemic was on the rise when they sketched major plans for growth this year.

Back in January, we published our 2020 RealLIST Startups, stamping the most promising startups we thought would make some major strides. While putting this list together, this reporter considered various factors including funding raises, team growth, founder strengths and more.

A lot has changed since we first published this list.

If I could tell the future, I would have asked these startups in January, “How do you plan to continue growing through the COVID-19 pandemic while keeping your team safe and supported?”

Even if founders could answer that question, there’s no right or wrong answer. We’re eight months into the year, nearly six months into the pandemic and we’re all still figuring out the best way to navigate this unprecedented time.

Between reaching out to our 2020 RealLIST startups’ leaders, pulling from our reporting so far this year and doing some outside research, here’s some updates on how our top 10 “most promising” companies are doing:

This three-year-old insurance tech company provides workers’ compensation insurance to small and medium-sized businesses via its online platform. Since selling its first insurance policy in March 2018, Pie has grown to expand its workers compensation offerings to 34 states and D.C.

In May, the startup raised $127 million in with investments from lead investor Gallatin Point Capital with participation from existing investors including Greycroft, SVB Capital, Aspect Ventures, Elefund and Sirius International Insurance Group. The company used $27 million for growth and expansion plans, while the other $100 million went toward launching a new affiliate company, Pie Carrier Holdings, to create and purchase licensed insurance companies. Through its new venture, Pie issues a portion of its own insurance policies. This Potomac, Maryland-based real estate tech company curates a platform to help realtors manage renovation projects while also helping homeowners flip their homes to make a better profit. Curbio was founded in 2017 and has raised $11 million in venture capital to date, including a $7 million Series A funding round last June.

Since the pandemic hit, the startup launched a “Pivot to Curbio” campaign to offer contactless renovations. Curbio has also began offering more resources to agents using its platform and introduced a $100,000 fund to protect its subcontractors’ physical and financial health. Curbio has also developed a program to cover relocation expenses for homeowners using its platform during renovations. To abide by some state restrictions, the company halted construction in some of its markets but has since resumed.

When we published the RealLIST, Curbio was being used across 13 U.S. markets but the company is now operational across 21 markets with plans to be available in 25 cities by the end of 2020. The startup has expanded to Los Angeles and Denver, among others, since April. Wharf-based healthcare analytics startup Socially Determined had just closed a $11.1 million Series A funding round days before we published the RealLIST in January.

The company offers a platform focused on the science and measurement of the social determinants of health with offices in D.C. and Blacksburg, Virginia. The company is working on developing its flagship product, SocialScape, a cloud-based platform that uses advanced analytics and algorithms to quantify and visualize social risks for healthcare organizations.

In March, the company began developing tools for first responders to identify vulnerable populations that could be most effected by COVID-19. Its COVID-19 Social Susceptibility Index features demographic, clinical and social data for responders to see which communities are most at risk. Socially Determined teamed up with CareFirst BlueCross BlueShield to assess COVID-19 risk for its members in the D.C. area. Procurated manages a digital platform that allows public sector organizations to incorporate peer reviews into their supplier selection process. The company is one of the youngest to be featured on the 2020 RealLIST, having only launched last year.

As promised earlier this year, Procurated has hired seven new team members, most of them after the pandemic struck, the company’s founder and CEO David Yarkin told Technical.ly. He said the company plants to hire seven more “Procurators” over the next five months, starting with an operations associate and a product manager.

“While we were fully committed to having everyone be based in the DMV, we now recognize that we all will be working remotely for a long time and are actively recruiting nationally,” Yarkin said.

Before the pandemic hit, Procurated had one state contract with Pennsylvania and has since expanded to Massachusetts and Nebraska with plans to move into two more markets soon.

Procurated’s biggest challenge during the pandemic has been the fact that its primary decision makers, chief procurement officers, were on the front lines of fighting the coronavirus, according to Yarkin.

“They were working 14 hour days, 7 days a week, trying to get PPE from China and anyone who had it,” Yarkin said. “As a result, there were a few months where we knew they couldn’t focus on anything else, nor should they. While they are not out of the woods, things are beginning to return to normal.” Members of the Procurated team as of December 2019. (Courtesy photo)

This Falls Church, Virginia-based satellite startup providing mobile connectivity from space has been busy at work advancing on its mission. The three-year-old company’s patented space tech is designed to allow cellphone users to stay connected virtually anywhere on the globe using low-earth-orbit nanosatellites, even for people in isolated areas. With a 20-person team, Lynk has raised $12 million in venture capital to date.

The company is working to use satellites to provide broadband services to mobile phone users all over the planet. In February, Lynk successfully sent text messages from space to a mobile phone on Earth. The company tested its tech on the ground for a year before this success came. Lynk also launched its fourth spacecraft in March to expand this type of testing.

Before the SXSW festival was cancelled earlier this year, Lynk was also named a finalist for the festival’s 2020 Innovation Awards. Some Lynk staff members as of January 2020. (Courtesy photo)

Please Assist Me is the curator of a tech platform that connects people with reliable assistants to help them manage day-to-day chores and tasks. The company paused its in-home services briefly at the beginning of the pandemic until it was able to secure the necessary PPE materials and establish safety protocols to keep employees and customers safe, cofounder Stephanie Cummings told Technical.ly.

“We are happy to provide services during this time that have been particularly helpful including grocery delivery, prescription pickups, and running errands,” Cummings said. “We knew Please Assist Me was helpful but we were thankful to be able to provide services to keep people safe.”

The company has had plenty of work since more people are spending time at home and need assistance, the cofounder said. Its biggest challenge was deciding to pause its in-home services.

“I feel like putting our employees first provided even more loyalty among those who work with us,” she said.

During this time, Please Assist Me has established new apartment relationships as buildings are looking for more all-inclusive amenities to attract and retain residents. You can find Please Assist Me in the District in six complexes including The Channel and Incanto in the Wharf and The Hepburn in Adams Morgan.

With operations in D.C. and Nashville, Tennessee, the company is currently hiring more assistants, Cummings said. Stephanie Cummings of Please Assist Me accepting her award at the Vinetta Project 2019 Venture Challenge. (Photo by Michelai Graham)

Happied, a women- and minority-owned business, is the company behind an app featuring an interactive database of more than 450 D.C. happy hours. With most of its customers interacting in person at bars and restaurants,  cofounders April Johnson and Sharon Cao had to quickly came up with ways to keep serving the community through the pandemic.

Since then, the company has hosted virtual community happy hours and pivoted to launch Happied Virtual, a platform offering social experiences online, including solidarity socials where organizations can facilitate communal discussions on tough topics like systemic racism and police brutality. Happied is also offering happy hour kits for purchase with the cocktail materials and the tools to make the drinks included. This startup created a one-of-a-kind discreet napkin that tests for the presence of date rape drugs in beverages. KnoNap was founded three years ago by Danya Sherman and its tech is currently still patent pending.

When Sherman competed at a Vinetta Project pitch competition in 2018, she said she had plans to market KnoNap to local bars so the product can be dispersed widely. Unfortunately, we haven’t heard many updates from the company on its business model, and many bars and restaurants have closed or changed operations since the pandemic started. Danya Sherman of KnoNap (third from left) at the eMerge Americas Global Startup Competition in May 2019. (Photo via GW’s website, used under a Creative Commons license)

Founded two years ago, the startup is building wearable vital monitoring and emergency alert devices, to be placed in the user’s ear, that warn people when their vitals are out of normal range and contacts 911 to receive help.

Founder Shavini Fernando told Technical.ly that some of the main challenges of operating during this time is securing investments and contacting manufacturers since communication has been slower and over email. The pandemic impacted her business positively and negatively: Committed investors pulled from backing OxiWear when the pandemic hit, so it’s been hard to “get the work done,” Fernando said. On the other hand, a need for the OxiWear device has been growing.

“We got more traction as Oxiwear can be used to understand silent hypoxia in people with COVID-19, especially for people who’re infected but not showing symptoms,” she said.

Despite the challenges, Fernando said her team has managed to develop the company’s minimum viable product. OxiWear’s team also grew from three to eight employees since the beginning of the year.

OxiWear launched a campaign earlier this month to take pre-orders for its product. Launched in 2017, this company uses technology to bring career guidance to college students in emerging markets. Localized founder and CEO Ronit Avni said the startup is growing and it plans to add new team members this fall.

Localized was more prepared than most to continue operating through the pandemic since the company already fully works remotely.

“We’ve always been a remote and distributed team so we didn’t have to adapt when COVID hit,” Avni said. “We are helping students and recent graduates find role models, learn about career paths and connect with employers and jobs in the midst of the biggest economic contraction since the Great Depression. Universities are expressing their relief that we can help them pivot to online content and programming at a world-class level.”

In June, the company hosted a virtual career fair across the Middle East and North Africa with top employers and 10,000 participants, Avni said. Demand for the company’s services continue to rise as universities are finding ways to offer more virtual programming and content for students.