Starting Thursday, the technology workforce training company Catalyte will open a new chapter as a former Twitter executive takes over its top position.

Catalyte, which is based in the Otterbein neighborhood and boasts talent hubs across the country, announced Matt Derella as its new CEO this week. Derella will take over from outgoing CEO Jacob Hsu, who announced his departure in a LinkedIn post that referenced Catalyte’s mission to bring more people from underrepresented communities into the evolving tech workforce — and his personal connection to that goal.

“Maybe it was the story of my own family. Immigrant parents who, because someone believed enough in their abilities to give them a foothold on the ladder to the American Dream, meant that I could forge my own path through life,” Hsu wrote. “Whatever the reason, that decision [to join Catalyte] was one of the best I ever made. My time leading this marvelous organization and its staff dedicated to eradicating the skills, opportunity and income gaps has been life-changing.”

“While I can’t reveal my next steps just yet, I will be taking all I’ve learned here and forging a new path through social innovation, entrepreneurship and public service,” he added.

Hsu will now transition to becoming the board director of Catalyte, which communications director Adam Curtis told Technical.ly has a distributed workforce of about 650 people. That number includes people in apprenticeship-type positions who “will be, hopefully, ending up fulltime at one of our client organizations,” he added. 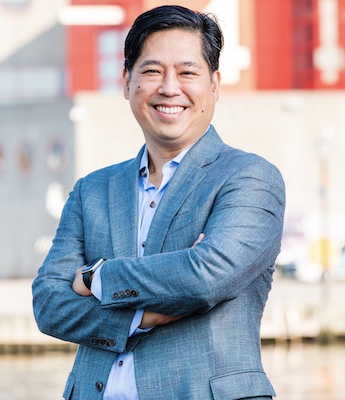 Derella, in a near-reversal of Hsu’s path, arrives in the CEO role after having joined Catalyte’s board back in March of this year. The New York City-based executive previously worked as Twitter’s chief customer officer and spent almost nine years with the social media giant, between 2012 and 2021.

Derella told Technical.ly that he came to Catalyte after leaving Twitter, where he got to test new ways of developing and recruiting talent (he described some of this as “the poor man’s version of what Catalyte does”), and wanting to ensure his career made an impact on opportunity pipelines. He joined the board of MoneyLion, a mobile banking platform with financial wellness tools, and had planned to start a nonprofit that could train tech sales professionals in New York City. He saw the opportunity to do similar work on a larger scale when a friend brought up Catalyte’s then-open board position.

Conversely, Derella added, Catalyte’s leadership saw in its new board member someone who could scale and grow the company to new heights.

“I started at Twitter when it was pre-IPO, was probably doing about $50 million in revenue,” Derella explained. “In over nine years, I got to see a lot of ups and downs, but ultimately exited with us generating over $5 billion in revenue, hundreds of thousands of customers, [landing] in the S&P 500 — just a real big arc. I think some of those patterns that I’ve experienced and, frankly, the lessons I’ve learned through those experiences hopefully would prepare me well for being the CEO of this company as it goes through its next chapter.”

While he plans to continue living in the Big Apple, where his children are still in school, Derella said that he plans to regularly visit Baltimore and other Catalyte hubs. He also pledged to reinforce Catalyte’s footprint in Baltimore, where the company’s prior fellowship program with the city government laid the groundwork for this year’s $15 million, degree-agnostic talent training program for the State of Maryland.

“I’m sure some readers will say, ‘Is he really going to make Baltimore still an important part of what Catalyte is?'” Derella said. “All I can say is: We’re going to be doubling down on Baltimore and building out the community. We want to be a company that the people of Baltimore and the greater region in Maryland are really proud of, for what we’re doing.”

How that looks remains to be seen, as Derella plans to spend his first 100 days working “to understand what’s happening, to hear from our customers, to hear from the teams.”

“But hopefully, at the end of that, we’ll get really crisp on a few key things that we’re really going to overcommit to, and that the teams will be really energized by,” he added.