The Kansas City, Mo.-based Kauffman Foundation released its newest entrepreneurship report on Thursday, this time focused on “Startup Activity.” The report, which ranks 40 large metropolitan areas in terms of their startup activity levels, puts the D.C. metro area at No. 25.
First things first — some useful definitions. The Kauffman report defines “startup activity” as a composite of the rate of new entrepreneurs, “opportunity share” of new entrepreneurs (i.e., entrepreneurs driven by opportunity rather than necessity) and startup density. The data for the first two comes from the Current Population Survey co-produced by the U.S. Census Bureau and the U.S. Department of Labor Statistics. The latter is based on the U.S. Census Bureau’s Business Dynamic Statistics.
Read the report
Essentially, the higher the metro area’s score on these three metrics, the better its ranking in terms of startup activity. 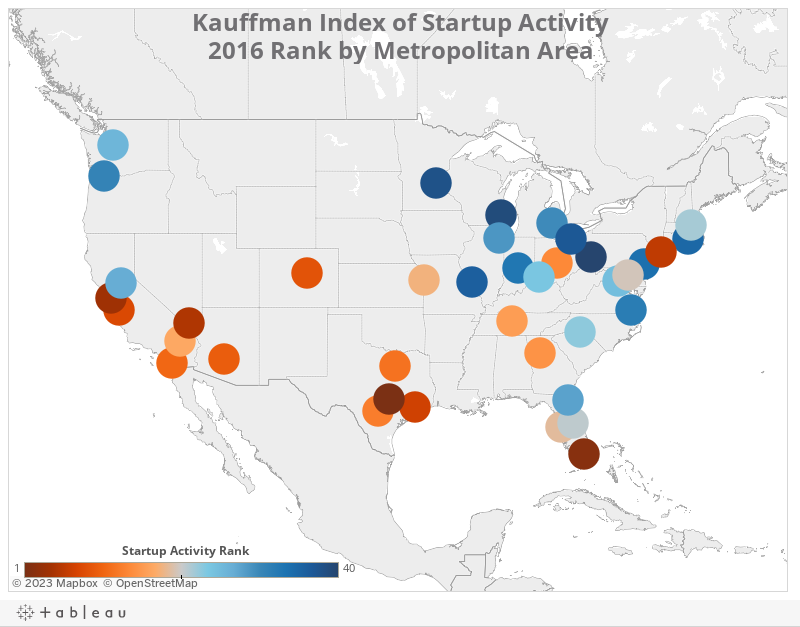 //
The Startup Activity Index is just one of Kauffman’s entrepreneurship reports — the foundation also produces a Main Street Entrepreneurship report and a Growth Entrepreneurship report. The goal of all these reports, an introduction notes, is to explore the question “what makes entrepreneurship grow?”
Kauffman’s vice president of entrepreneurship, Victor W. Hwang, offers this meditation: “The key to building successful ecosystems is a culture that connects people and enables them to share unique experiences, skills, and insights in collaborative ways.”
You may remember that, when the latest Growth Entrepreneurship report was released in June, the D.C. metro area ranked No. 1.
Given this, it’s certainly interesting that D.C.’s Startup Activity score is so different. But then again, we’re talking about completely different metrics. The Startup Activity score is more closely aligned with growth in the number of new startups, while the Growth Entrepreneurship score was, appropriately, about growth of existing startups.
The D.C. metro area came in just below Cincinnati, but above Seattle. Austin, Texas, was ranked No. 1.
On a positive note, though, D.C. rose, overall, in the rankings. The area was ranked No. 28 in 2015 — No. 25 in 2016. Digging in to the ranking, te D.C. metro area saw growth in the rate of new entrepreneurs category, a slight decline in the opportunity share of new entrepreneurs category and a more or less steady score in terms of startup density.
The Kauffman Foundation also released a report focused on states — Maryland ranked No. 13 (down from No. 12 in 2015) and Virginia ranked No. 17 (down from No. 16 in 2015). Learn more about, and read, both reports here.