Baltimore Innovation Week 2019 had a lively flurry of events Wednesday, as a bevy of leaders in the tech and entrepreneurship communities convened for Dev Day at 1100 Wicomico.

Alongside panel discussions and Technical.ly’s awards event, founders had a chance to show off what they were building at an expo throughout the afternoon. That included plenty of physical products in the mix — which is fitting, given that it was in the same building where co-organizer Harbor Designs and Manufacturing is headquartered.

Among a diverse range of uniquely talented individuals and organizations, here are a few of the entrepreneurs we met at Dev Day: “We do a lot of alarm work, so I said, ‘Why don’t we get a smoke detector that actually does something [besides] make a noise?’” Baldino said.

“We can concentrate it on stovetops, but not only does it work like a smoke detector, it actually puts out the fire.”

FireBot is a small battery-powered device that will automatically activate in case of a fire to properly extinguish a stovetop fire to prevent damage and injury. Upon activation, it sprays environmentally friendly, non-toxic, water-based fire suppressant to extinguish a fire.

Baldino said he hopes to distribute his product to several apartment complexes in the next few months. Though winter is fast approaching, it’s never too early to prepare for hot weather. Most people buy fans or use air conditioning to battle high heat, but it’s difficult to stay cool at all times. That’s where Mobile Comfort looks to change things.

The company’s product looks to produce personal air conditioners that require no ventilation or wires.

“It’s basically cool air anytime, anywhere,” Stave said. “Set it down next to you, and it creates cold air.”

Stave said he hopes the device, developed by thermodynamics researchers and professors at the University of Maryland, will be fully complete by this coming spring once the temperature picks up. 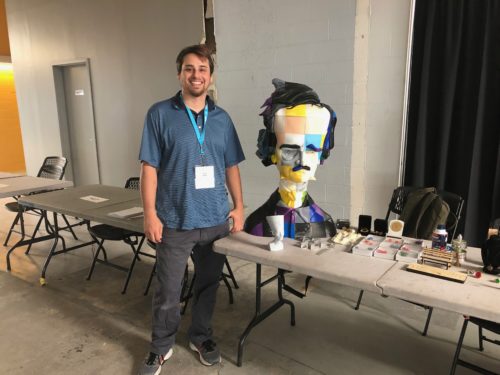 Blatt never thought 3D printing could lead to success until it happened to him nine years ago.

In 2010, he printed a replica of an old radio worn by sand troopers in Star Wars for a friend. His friend sold copies of the replica and gave Blatt $20 every time one was sold.

“I thought that was awesome I could make money from something I’d done in the past,” Blatt said.

Once Blatt realized this was a profitable business, he went all in. Now, Blatt, who primarily runs the business alone, is not shy about any requests. He said he has manufactured a wide range of designs such as film replicas, jewelry, maps and custom parts for businesses.

And that bust of Edgar Allan Poe pictured above? It was a crowdsourced 3D printing project that Blatt coordinated through another effort: We The Builders. AlgenAir produces a natural air-purifying device that uses algae to clean the air we breathe. The Aerium reduces carbon dioxide and increases oxygen as efficiently as 25 house plants, according to Fucich.

Fucich said the device can be used in one’s home, office or workspace. He stressed that the inspiration for the device came from the desire to improve indoor air quality.

“We’re excited to change the perception of algae and help people use algae so they can live better,” Fucich said.