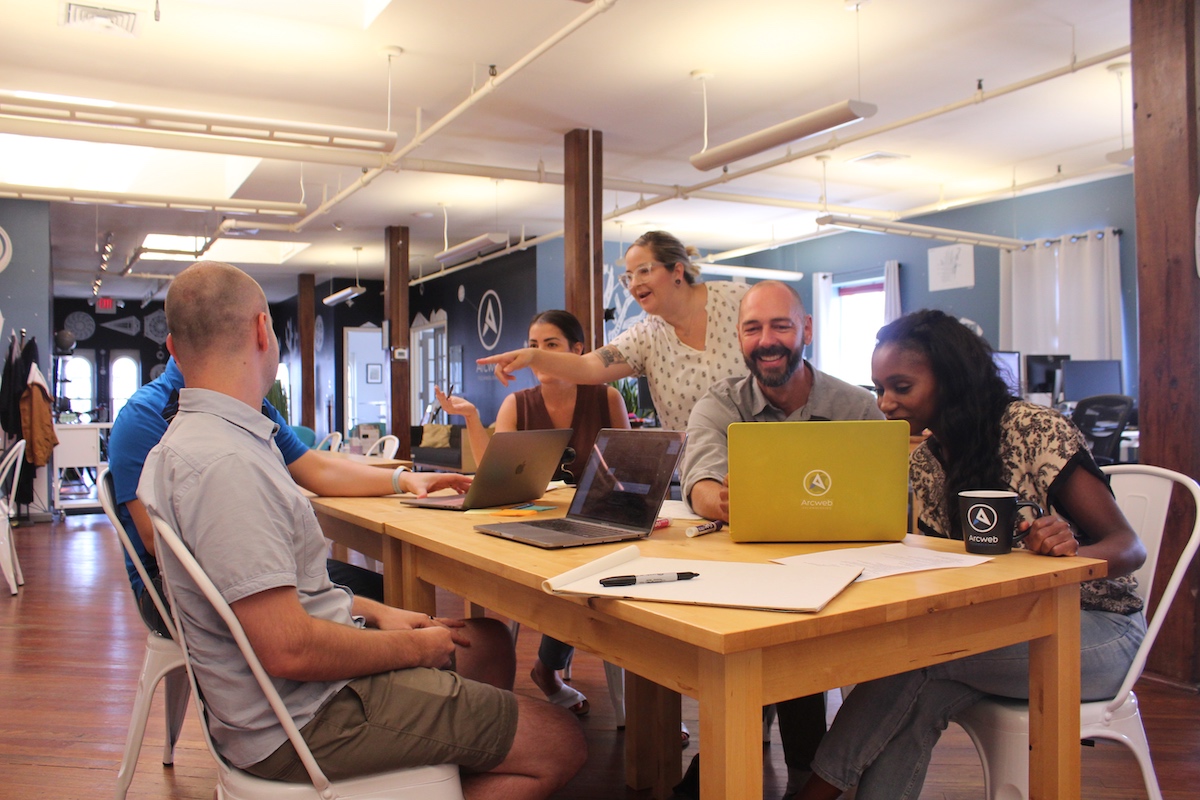 Members of the Arcweb team as of August 2021.

While nuggets of information here and there are useful, so much decision making happens in the moment. You’re often working with what you’ve got in front of you:

“So much business success happens at the exceptions, not the rules,” he said.

Accordingly, Cera was a bit of a rule breaker with software consulting and development company Arcweb, which is celebrating a decade in business this month: “I did everything they tell you not to — I was a solo founder, I bootstrapped my company, and a lot of my first hires were friends.”

May of 2022 actually marked the company’s 11th year, but the pandemic pushed back hopes of celebrating in person. The team will do so at its Old City HQ on Nov. 18. In honor of more than a decade of growth for Cera’s second company, he told Techncial.ly all about its evolution, its failure moments and points of reflection, plus the advice that turned out to actually be helpful.

The engineer behind the company

Years ago, after walking away from the first company he cofounded, web-based document serving platform Vuzit, Cera struck out into consulting. He was in his early 30s, and was serving as Philly Startup Leaders president, but he felt like he was in a tough spot.

“I’d just spent years on this company, with — at the time — almost nothing to show for it, and I felt I hadn’t really done anything,” Cera said. “I felt like I had a lot I wanted to do, but my reality had exceeded my ambition.”

When he began building Arcweb in 2011, Cera’s engineering background influenced much of his decision making. Often as an engineer, you’re handed something to work on with a core plan and strategy decided by other teams already in place. But when building it, you may run into the ways in which the product won’t work. But sending that message up the flagpole eats up a lot of time. It illuminated that a great UX designer and product manager can make product development go so much smoother.

“I wanted to make sure as a company we’re going to have really well thought out user testing and wholistic product management strategy,” Cera said. “We’ve run with that since inception.” Although Cera envisioned Arcweb to be a product-based company, its start was in business services, a route it’s followed since. He turned his consulting business into hiring teams for other people, and eventually, into hiring people to work for himself. Ten years later, Cera said the company and the team have gone through periods of early growth, then quick growth, and now rest at a much more stable pace. At around 30 employees, they’re finally starting to dabble in the product space again (more to come, Cera says).

The founder came to an inflection point around 2019 when Arcweb was getting a lot of attention. It had made the Inc. 5000 list and the Philadelphia100 in previous years, and Cera got a few offers for the company. It made him question nearly everything about building a business, he said.

“I stress tested everything about what I’m doing here, why I’m here, what does it mean to be here?” Cera said. “That shook everything for me.”

An acquisition is seen as the narrative of success that many entrepreneurs follow — that success means starting and selling as many companies as you can. Instead, he realized, his heart was in continuing to build, and investing in his team. He really liked the people he worked with, and he liked his job. If he sold, he’d be saying goodbye to the people and the future opportunities Arcweb held.

“I realized that the second I sold my company, I’d probably want it back,” Cera said.

When this Technical.ly reporter nudged him for a piece of advice that he did find useful, he said he was told that focusing on sales was the highest value activity in the early stages of a startup. He also realized, as an engineer, he tended to shy away from those business development pieces. So he hired someone else to do it in the last days of Vuzit — an investment banker who worked the phones and emails with a target list to sell the company in a way Cera said he could never do. He later modeled that behavior in the early days of Arcweb.

“It changed the course of my trajectory,” Cera said.