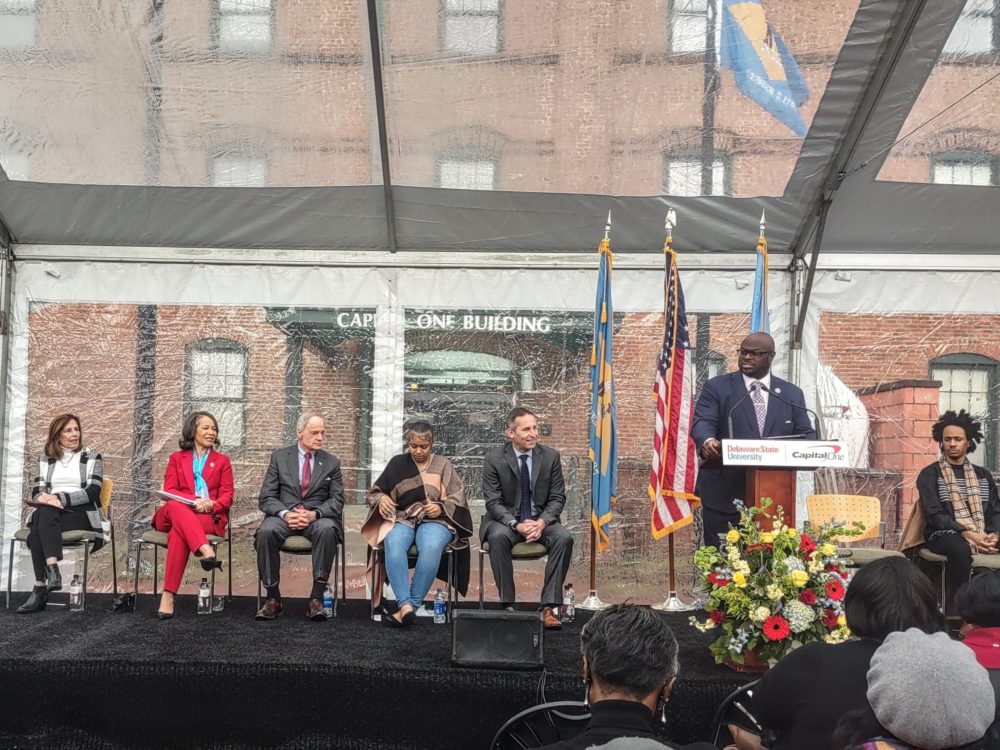 Delaware State University, Delaware’s HBCU, made its official return to Wilmington on Friday. The opening event marked a living moment of Black history.

Capital One donated the new campus to Del State last summer. It’s on the Riverfront, and easily accessible to youth, graduate students and workforce development students coming from historically underserved neighborhoods in the city.

“Black history is American history,” Allen said in a speech at the building’s ribbon cutting ceremony. “That’s more than a catchphrase. It’s the truth.”

Del State was one of many HBCUs threatened with violence this month, a reality that didn’t stop a large crowd from attending the symbolic event.

“Many of you know that this exact location was an important crossing in the Underground Railroad,” Allen continued. “Wilmington was known in 19th century as the last stop to freedom on the Eastern line. A white businessman named Thomas Thomas Garrett lived just a few blocks away in Quaker Hill and helped Harriet Tubman free thousands through this very spot.”

The proximity to the Underground Railroad route wasn’t figurative or exaggerated. The new campus at 1 S. Orange St. sits facing South Market Street just as it turns into the Market Street Bridge, the drawbridge that crosses the Christina River leading toward New Castle. The statue at Tubman Garrett Park. (Photo by Holly Quinn)

That bridge is the literal bridge that Tubman crossed multiple times. It’s why the park that the new Del State building faces is called Tubman Garrett Park, with its spectacular sculpture marking the history. Just beyond the Riverfront Market just south of the DSU building you’ll find another historical marker facing the bridge itself.

Inside the building there are impressive views of the river — and of the bridge.

For many Wilmingtonians who cross the bridge daily to Route 13 to and from work or school or the Chase Fieldhouse, it’s easy to forget how profoundly important that stretch of road is (especially if you’re cursing having to wait for the drawbridge).

Allen also announced the launch of an executive mentorship program between Capital One executives and Del State sophomores and $270,000 in grants for the university’s experiential learning programs.

The building, which was renovated by ING Direct in the 2000s before it was acquired by Capital One, needs little renovating, with its modern conference room and meeting spaces, though it is expected that some of the space in the six-floor, 35,000-square-foot building will be converted to classroom spaces.

In addition to Del State graduate degree programs and workforce development programs, The Warehouse, a teen-focused center based in Riverside, will have space on the second floor for its RISE (Reaching and Investing in Youth for Sustainable Employment) program, which kicked off last week with the presentation of $500,000 from program partner Barclays US Consumer Bank. A conference room in the new Del State building. (Photo by Holly Quinn)