A whopping $11 billion might be available to support Baltimore’s development as a more innovative and equitable tech hub — so long as the right economic players and dynamics come to the fore.

That’s what UpSurge Baltimore, the local startup ecosystem builder known for its “equitech” framework, argued in a report it released today. The amount calculated in “The $11 Billion Opportunity” represents potential new startup capital that UpSurge said could be leveraged over the next three to seven years.

The report is the latest of the organization’s products since it launched in spring 2021 to help make Baltimore more of an “innovation hub.” It previously released an ecosystem guide — one of our nominees for this year’s Technical.ly Awards — during its first-anniversary event in June. Through this work, said CEO Jamie McDonald, the organization continually saw capital as a gap in the tech ecosystem.

“That is the foundation for the original question that we asked, which is: If capital is one of the critical gaps — it’s not the only one, but if it’s one of the key gaps — what do we need to do to figure out how to unlock the line-of-sight capital that exists in our ecosystem, and some of the national capital that should be in our ecosystem because we would be the best place in the country to deploy it?” said McDonald.

The report examined this question by looking at six stakeholder groups: existing venture investors in Baltimore companies, national venture investors, foundations and endowments, high net-worth individuals, corporations and government institutions. After applying logic-based algorithms to each group, McDonald and colleagues found that the aforementioned capital could become a reality so long as every group embraced this equitable tech ecosystem development as a major concern — and made capital pivots in tandem.

“What we found was a significant amount of capital that could be unlocked with 1) an alignment around this as an important priority for our city, and kind of a win-win for each of the stakeholder groups; and 2) very small reallocations of capital to Baltimore based on the benchmarks that we set out in the report,” McDonald explained, adding: “We said, ‘Look, it’s easy to just talk in theory about the fact that we need more capital in our ecosystem. But we felt like it was another thing entirely to start to talk in reality about what is the capital right in our own backyard.”

This project started in August, with the analysis completed in October before going to a sounding board of stakeholders for their insight and recommendations. McDonald said the organization thought it was important to release the report before 2023 because Baltimore’s venture capital market is continuing to grow this year despite the national one doing worse. 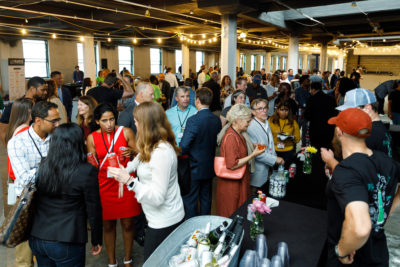 McDonald also noted a key takeaway from the report: that Baltimore has the capital and startups to be successful, but needs to grow the culture of tech that other major tech cities have.

Another of the report’s takeaways was that founders from underrepresented groups have a lot of potential for opportunity. McDonald found this is especially important because the tech economy should want to invest where there’s a chance to grow. In tandem with UpSurge’s equitech vision, in which Baltimore’s economic vitality is inextricably committed to equity principles, the report found that many corporations who made pledges to diversity-focused venture funds did not actually deploy that money.

“That felt like, to us, a really important opportunity, because, again, we take them at their word that the intentions are sincere but also recognize how hard it is to figure out how to do to do that,” she said. “And we want to raise our hands and say, ‘We can show you how to deploy it here in Baltimore.'”

For each stakeholder group, the report provides recommendations for how they can start putting that money into Baltimore’s tech ecosystem. McDonald said her staff is meeting with leadership teams from among these groups to help them understand why and how they should direct their capital into the ecosystem.

Looking forward, McDonald said UpSurge expects to make an announcement related to the report, and a commitment to work towards a benchmark, soon.

“If we can show how we can tackle this one really vital piece of growing our tech economy, and that it’s tactical and benchmarkable, we think that gets more people aligned around the priorities they will place on helping us work toward that,” she said.

Sarah Huffman is a 2022-2023 corps member for Report for America, an initiative of The Groundtruth Project that pairs young journalists with local newsrooms. This position is supported by the Lenfest Institute for Journalism.
Companies: UpSurge Baltimore
People: UpSurge Baltimore / Jamie McDonald
Subscribe