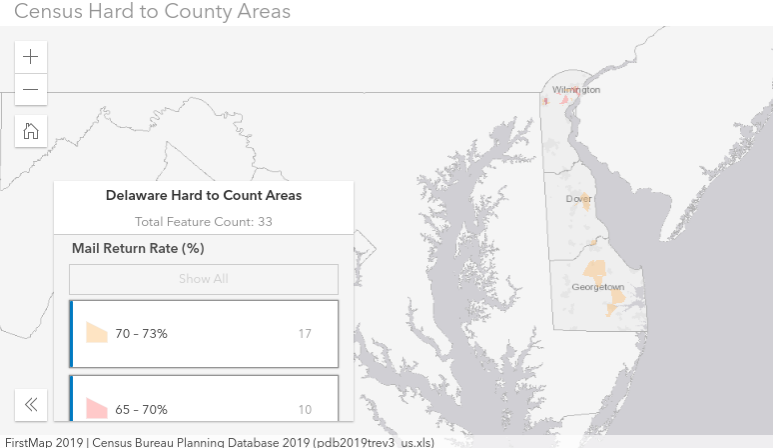 The 2020 U.S. Census faced challenges from the start.

In 2010, after just 64% of Delawareans mailed back their completed census forms, Census takers weren’t able to close the gap with what is called Enumerated Nonresponse Followup (NRFU) — which used to involve a lot of knocking on doors.

In 2020, with the help of a public-private-nonprofit partnership that included the State of Delaware’s Complete Count Commission, Tapp Network, Wilmington Alliance, NERDiT NOW, Delmarva Power, Christiana Hospital, Delaware Department of Technology and Information, Share Delaware and Delaware Public Libraries, the state was able to very nearly hit its goal of a 100% response rate.

The U.S. Census saw final response rates of 99% across the country, even with the disruption of COVID-19 that, among other things, took away access to that public libraries that offer free online access to census forms (though other issues did limit response in some areas of the country). It’s a testament to a lot of hard work, to be sure, but it also shows how far the use of technology has come in 10 years.

One thing that made a big impact on census data collection this year was an online information portal to help the Delaware Census 2020 partners communicate better and work as a team, as well as an interactive map showing, in real time, exactly which areas were being underrepresented and therefore may need more resources to get an accurate count.

“We could target much better than we could 10 years ago,” said Joe DiGiovanni, cofounder of Tapp Network, whose team developed the communications platform Delaware’s census website. “COVID-19 hit and we had to pivot, not just with the community, but with the partners. You can literally go on the U.S. government website and see the numbers — the fruits of our labor — in real time and what was working. It kept everyone accountable.”

In 2020, the self-response rate was just under 65%, not much higher than the mail-in response in 2010, even with the new feature of online census response. But this year, the NRFU, with its new tech resources, was able to close the gap.

The data tracking was able to identify issues with the way the census itself identifies residents. Each physical residential address on the map is expected to equal one household of at least one person. But it doesn’t always work that way, especially in the beach towns where seasonal homes are owned by people who take the census in their upstate or out-of-state primary residence — and often, houses are 100% short-term rentals that are never lived in. That can trick the system into thinking that there were a massive number of non-responding people in Sussex County.

“We were able to identify that problem with the beach population,” said Laura Wisniewski, community and special projects director for Lt. Gov. Bethany Hall-Long, who is the chair of the Complete Count Commission. “We worked with City Councils to determine how many properties were full-time residential homes. After analyzing it with local governments, we found that only 15% are year round.”

The state already had methods of counting other residents who can easily slip through the cracks, such as people experiencing homelessness, people who are incarcerated and people in nursing and group homes.

“When you have a lot of people at one location, that’s a group count, which is done differently,” Wisniewski said. “They’ve been counting those groups that way before 2020, before COVID.”

“The students at University of Delaware are a hard population to count, because they are counted as Delaware even if their parents live in another state,” Wisniewski said. When students moved out of UD residences due to the lockdown and returned to their parents’ homes in other states, it nullified a plan for counting students that had been two-and-a-half years in the making. Fortunately, she said, the universities facilitated in communicating with students.

In a normal year, scores of census counters would go door-to-door to help residents complete their forms. That kind of face-to-face data collection is untenable during COVID.

“No one’s opening their doors during a pandemic,” DiGiovanni said. But they did hit the pavement: Instead of door-to-door, census takers went to places like food banks and COVID testing sites. Billboards became less effective as fewer people were commuting by car, but DART bus stops used by many essential workers became hubs of information. They even used the libraries, despite the fact that they remain unopened to the public.

“Once they started doing curbside book pickups, we were able to distribute materials that way,” DiGiovanni said.

“Since census workers couldn’t get out in the field, people were asking [questions] on the Facebook page and people were answering in real time,” he said.

Through it all, the people who worked on the 2020 census project were in a constant state of change, and sometimes confusion.

“It’s important to note that Delaware worked hard, but all of the [federal] adjustments made our end date change like 10 times,” Wisniewski said. “The Trump administration announced that the count would end on Oct. 5 with two days notice. They had [previously] put out an order that anyone who is undocumented would not be counted, making it harder to count those residents.” (That order was rejected by a federal court in September.)

Their difficult and sometimes frustrating work did not go unnoticed: The project was honored with a Special Achievement in GIS Award by Esri, the developers of the geographic information system platform used to map the census in Delaware.