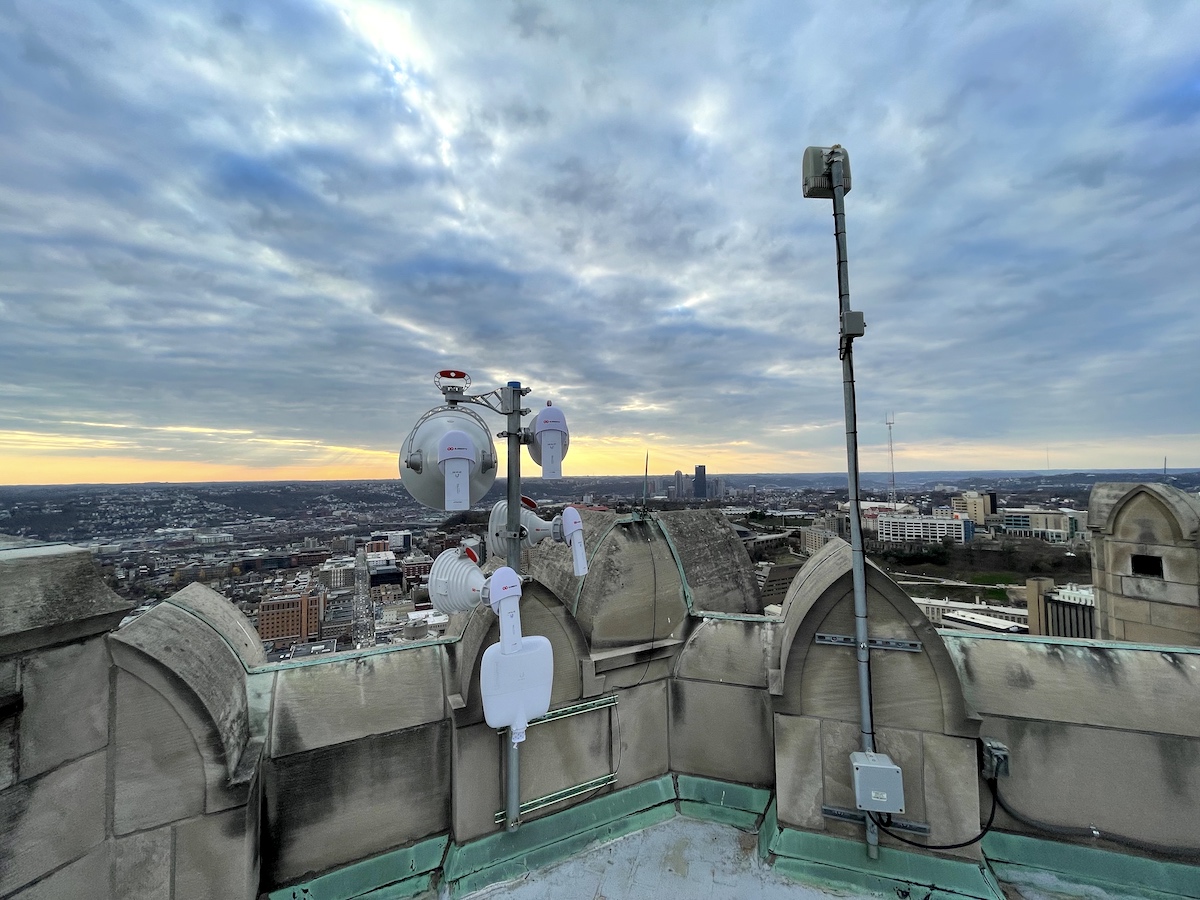 Meta Mesh atop the Cathedral of Learning.

The federal government wants to know what you think about broadband access in the United States.

The Federal Communications Commission (FCC) announced last week that it would seek comment on the proposal of higher internet speed goals for broadband providers in smaller rural communities. If successful, the proposal would set a standard of deploying widespread broadband service with a speed of at least 100/20 Mbps, which enables a maximum download speed of 100 Mbps and a maximum upload speed of 20 Mbps. That’s also the speed defined as “sufficient broadband access” by the Infrastructure Investment and Jobs Act required for a service area to be eligible for either the Rural Broadband Program or the ReConnect Program established by the legislation.

This new effort from the FCC is meant to align the Alternative Connect America Cost Model (ACAM) program with the new federal act. Launched in 2016, the program gives funding to broadband carriers to help them provide broadband service to high-cost and hard-to-reach communities. Previously, the ACAM program required carriers to provider connection speeds of 25/3 Mbps. The FCC is hoping to more than quadruple that.

“It has led to fiber facilities deeper in the networks of carriers serving these rural communities — bringing higher speeds and greater bandwidth to consumers. But like all good programs, it requires review when time advances and technology changes,” FCC Chairwoman Jessica Rosenworcel said of the ACAM program in a statement. “That is what we start here today. We propose a modernized, enhanced A-CAM program.”

A few Pittsburgh organizations took note of the request for comment on the proposal from the FCC, which comes after the PA Broadband Symposium held at the end of April. Wilkinsburg-based nonprofit Computer Reach shared the FCC announcement on social media and in a post on the organization’s website, encouraging the regional community to submit comments as the FCC looks to finalize the proposal’s details. While one goal of the FCC’s proposal is certainly to bring better broadband service to more people, the post on Computer Reach’s website also noted that the proposal includes efforts to improve the ACAM program’s efficiency and reduce the incidence of “duplicative support across different federal broadband programs.”

"Like all good programs, it requires review when time advances and technology changes."

Specifically, this new request for comment on the proposal from the FCC solicits feedback on the offering of additional ACAM support in exchange for more broadband deployment at new locations with higher speeds, the use of the Broadband DATA Act maps to establish new deployment obligations, whether or not a new enhanced ACAM program should be established, how to better align the FCC’s initiatives with congressional initiatives, and how to improve ACAM’s administration to better safeguard the Universal Service Fund.

Increasing broadband access speeds was top of mind at the PA Broadband Symposium, which featured representatives from other local digital equity-focused organizations such as Meta Mesh Wireless Communities, the Beaver County Redevelopment Authority and the City of Pittsburgh Department of Innovation and Performance.

At the time, Meta Mesh Executive Director Sam Garfinkel (who recently announced her resignation) said that installing connectivity systems that can be easily updated over time to account for increasing speed requirements is essential. Still, she added that even basic access to broadband is helpful to those who currently have none. Right now, Meta Mesh’s Every1online initiative aims to provide its end users with 50/25 Mbps, which exceeds the new upload standards proposed by the FCC, but is only half of the download ones.

These local nonprofit leaders, and the officials selected to serve on new organizations like the Pennsylvania Broadband Development Authority, will likely provide feedback on the feasibility of the FCC’s new proposal, and strategize on how to maximize federal funding for these initiatives in Pennsylvania. But public officials and industry leaders aren’t the only ones who can submit comment. Anyone with strong feelings about broadband access is encouraged to review the proposal and submit comments. Technical.ly has reached out to the agency for details on the process for doing so, and will update this story when we hear back.

Sophie Burkholder is a 2021-2022 corps member for Report for America, an initiative of The Groundtruth Project that pairs young journalists with local newsrooms. This position is supported by the Heinz Endowments.
Companies: Computer Reach, Meta Mesh Wireless Communities, FCC, Federal Communications Commission
-30-
Subscribe to our Newsletters
Technically Media