A Look Inside the Culture View Open Positions
TOP ARTICLES
1
Take a peek at Carvertise’s new Riverfront location
2
RealLIST Startups: Check out the top 20 DC companies to keep your eye on in 2023
3
RealLIST Startups: Meet the 2023 class of most promising Philly tech companies 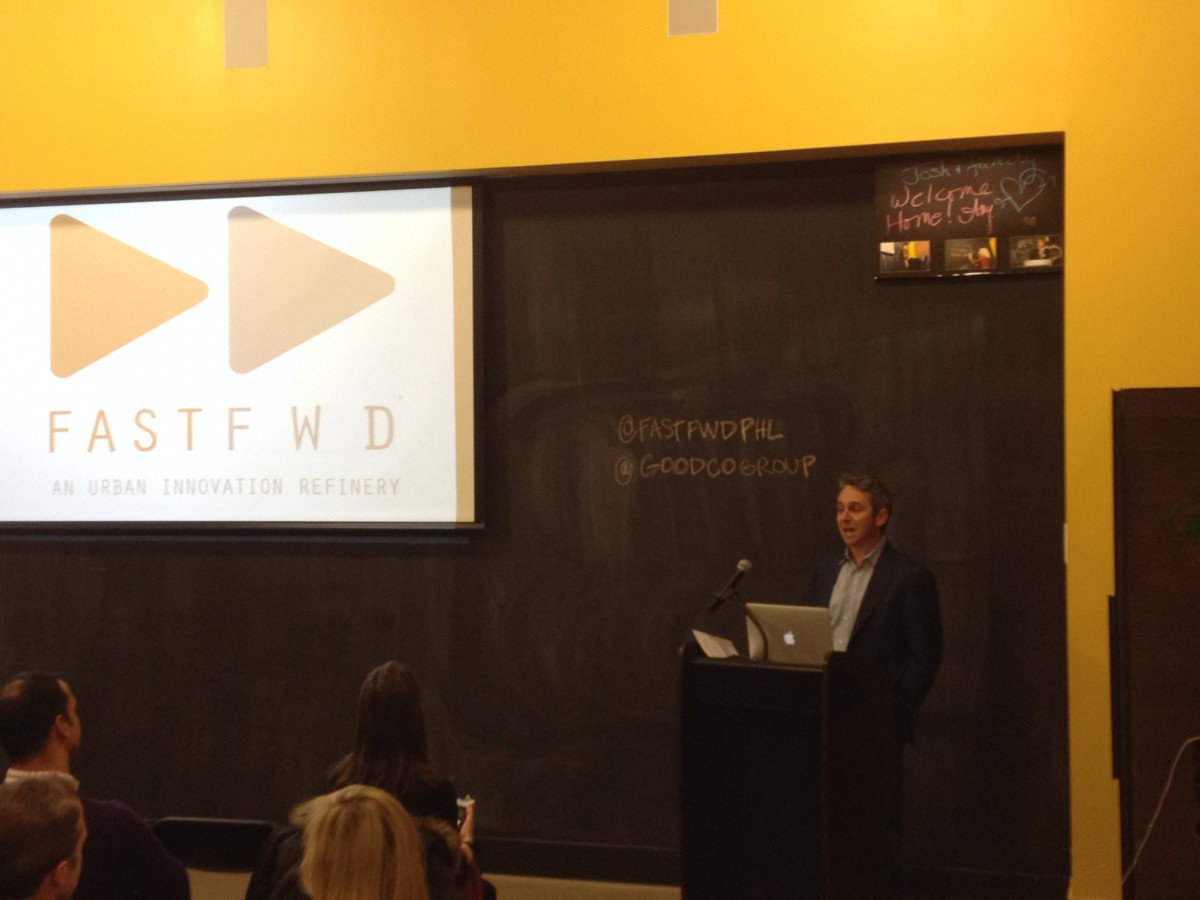 “For too long, social entrepreneurs haven’t had these guides,” First Round Capital partner Josh Kopelman said Thursday to FastFWD’s second graduating class.
The social enterprise accelerator is a collaborative effort among the City of Philadelphia, Good Company Group and the Wharton Social Impact Initiative. If you haven’t already, you really should read our piece from October about FastFWD’s initial successes and failings. The Bloomberg Foundation-backed program has put Philadelphia on the map for innovative thinking on procurement reform.
“This is an experiment. We’re still learning,” said program co-director Story Bellows. While this class may be graduating, she said, “from the city side, we’re really just at the beginning with FastFWD.”
Here’s a recap of yesterday’s pitches.

CEO Dave Guttman and COO Orlando Saez pitched their software company, which, according to Guttman, “helps data-driven decision-makers make smarter communities.” How? By using high-res images to create a 3D rendering of the world, accurate to a few centimeters.
This past November, the company worked on a project identifying electrical pole conditions in Philadelphia. What they found was that the client, a “large electrical utility,” was off by nearly 20 meters in terms of where their electrical poles were actually located.

CEO Matt Molter brings his experience in public safety and IT together with his software company. According to Molter, Agency360 “Brings all of employee management under one umbrella,” for 911 centers, law enforcement, EMS and other public safety workers.
The company partners with private training organizations to provide cost-effective and simplified employee management for cities who don’t have millions of dollars to pay for the service.
Molter, citing Agency360’s 100 percent revenue increases for the past two years, is looking for $350K in the next 18 months for his company to help Philadelphia “get more officers off their desks and back on the streets.”

Dr. Shruti Kapoor, Safty’s founder, lived in India for 20 years and witnessed firsthand the violent atrocities that women there face all too often.
Kapoor’s company empowers women to protect themselves against violence via education, social media campaigns and provision of equipment like pepper spray. Though she’s already raised money through crowdfunding and partnerships with small retailers, she still needs $150K to employ branding advisors.

According to founder and CEO Jimmy Chen, there are 180,000 eligible Philadelphians who don’t have food stamps: that’s tens of thousands of dollars in unclaimed benefits. Chen, a former product manager at Facebook and LinkedIn, plans on changing that.
He projects his company, which has already raised $11K via Kickstarter, to make $22M by 2019. He wants to raise $500K in a mid-March seed round.
As for partnerships, Chen says his company will be “having conversations with a couple different nonprofits in Philadelphia.”

Cofounder Alex Epstein says his urban farming network, which started as a “weird, scrappy group of students and artists,” utilizes urban agriculture as a tool for urban development and neighborhood revitalization.
They’re proposing a six-month pilot program, where they’ll work to create an urban farm in a crime-prone neighborhood, worth $250K of in-kind services. The farm is projected to cost over $1M, but produce goods worth over $4M — all while diverting a group of 10 young men from going to prison.

Founder and CEO Srinath Vaddepally says his app is a personal safety solution designed to decrease emergency response times by making it easier to alert authorities of a problem.
With AlertCall, Vaddepally says, there’s no need to unlock your phone to call 911 and no need to answer the responder’s first few questions. Essentially, it provides a simplified, user-friendly method of reporting crime.

The SMS engagement service (with Philly roots) was a product of last year’s FastFWD graduating class. Still, CEO Michelle Lee stopped by to present what her company has been up to and what it will be looking to do in 2015: raise $750K in seed round investment, reach 100 customers and launch version 2.0 of the company’s message engine.