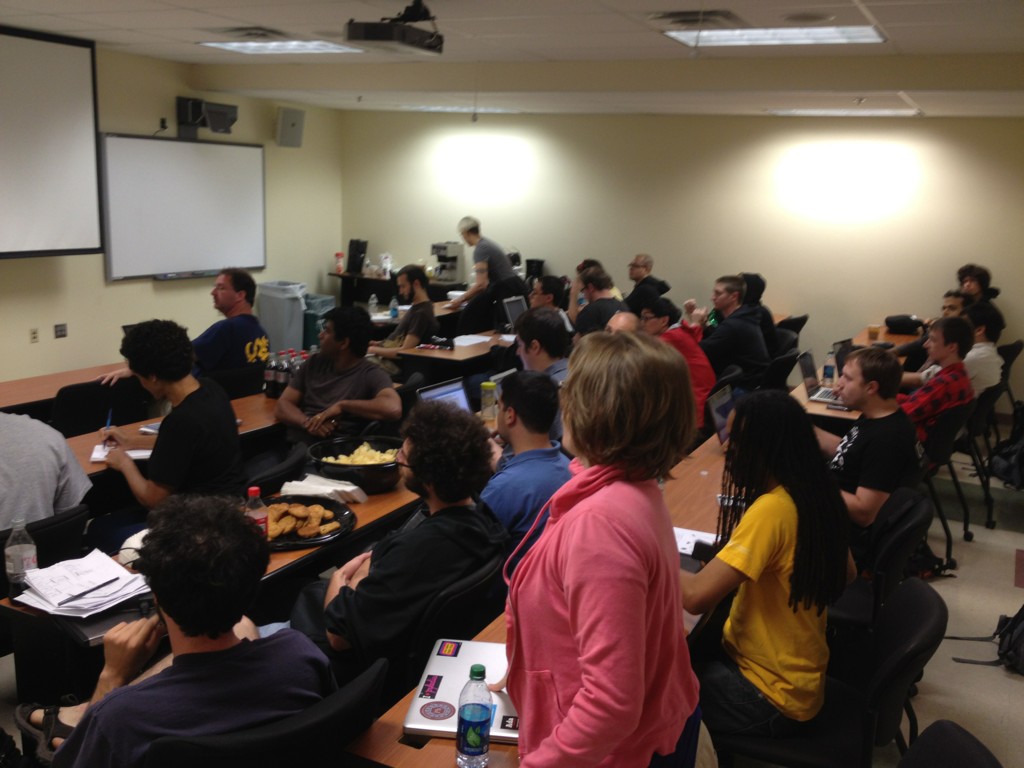 (Photo by by Philip Neuffer)

The first Philadelphia Random Hacks of Kindness featured six teams working on at least that many projects, including three that were awarded special recognition by judges this weekend.
The weekend-long hackathon focused on climate change and disaster relief management was held at Drexel University and organized by Drexel computer science PhD student Mike Brennan, partnered with Technically Philly. After a kickoff reception at Indy Hall, as many as 50 coders, designers and subject matter experts arrived Saturday morning at Drexel’s computer science building on JFK Boulevard. Photos of the event here.
Find the three featured hacks and other projects built during the weekend, in addition to getting a video tour of the end of Saturday’s hacking.

If citizens were more acutely aware of what disasters were around them, they might better prepare themselves, or at least that was the thought of this three-person team.
Oracle developer Adam Hinz, who helped build the OPA Data Liberator at the Philly Tech Week hackathon, partnered with Justin Kates of the Delaware Emergency Management Agency and Delaware firefighter Amos Scott, to build the Disaster Mapper, which allows residents to enter a Philadelphia address and have mapped its proximity to a flood plain, nuclear reactors, tornado landings and other threats.
“The current version is very Philly focused. In that sense we have a complete project,” said Hinz, who handled all the back-end and front-end work on the small team. “However, the near term goal is to improve the speed and add more datasets, specifically [Delaware Emergency Management] and hopefully add more content and polish off the website.”
Currently the site is running painfully slowly, something Hinz says he’ll be fixing in the coming days.
The project was inspired by an earlier problem definition brainstorm on Technically Philly.
FEATURED SUSTAINABILITY HACK: Philly SNAP

In Pennsylvania, the Supplemental Nutrition Assistance Program (SNAP) is the name of what was once called the Food Stamp program. The mission of the program is to connect lower income individuals with healthier options, by better subsidizing the right foods and offering partnerships with local produce vendors and farmers’ markets.
But with locations proliferating, many people receiving SNAP benefits might not be aware of nearby locations, particularly Philly’s expanding farmers’ markets, says Katey Metzroth an associate director at the Northwest Fund, a grant-making organization in northwest Philly.
Now there’s a tool for these residents, which SNAP organizations can share.
Metzroth, herself not a programmer, joined industrial designer Danny Chang and developer Tim Wisniewski, who worked with Hinz on the OPA Data Liberator project, to conceive and launch Philly SNAP, an SMS text message tool that gives users the nearest three locations that participate in SNAP.
The team received direction from Mark Headd, the Voxeo Labs developer behind the recently launched Phind It For Me SMS tool.
FEATURED CLIMATE CHANGE HACK: Ground Data Satellite imagery

Two representatives from the World Bank in D.C. colluded with a rotating cast of developers and data provided by NASA to kick off a project meant to compare locally-operated South American ground weather stations to satellite imagery, hoping to increase local government interest.
THREE OTHER PROJECTS

A handful of developers worked on smaller improvements to the Tor Project, the famed, decade-old, web anonymity tool that was discussed at the event’s outset by Tor Project Leader Roger Dingledine.
Three developers and a designer partnered with two Drexel MBA students on Splash, a decision engine for donating to efficient nonprofits.
A third team attempted to move forward Councilmatic, a sprawling initiative to give a friendlier, more versatile face to Philadelphia City Council’s legislation website. Though not present during the weekend, Code for America fellow Mjumbe Poe has led the charge on this project. See the project on GitHub.
Reporter Dan Newman contributed to this report.